Ameena Jardine, forensic specialist, becomes involved in a series of what seem to be drug overdoses. The cryptic clues left at each crime scene, a seashell and a bunch of flowers, plus the odd octopus tattoo all seem to point to a new drug cartel. With her partner Tony, Ameena begins to investigate the crimes but all is not what it seems.

There are two bases for Modi Ind0rum. One is the Fibonacci sequence, a mathematical concept that underlies the structure of much of the world: seashells, galaxies, even sunflowers. Ameena, suffering from PTSD, does not trust or confide easily, and much of the story deals with her inner conflicts.

Modi Ind0rum starts slowly and the author takes her time in introducing and developing the protagonist, Ameena Jardine (AJ), a former engineer who is now a forensic geomorphologist. AJ is a complex character, dedicated to her family and her job but suffering the effects of PTSD after the murder of her beloved husband, Michael. AJ’s past trauma results in her distance and distrust of relationships with other men, even the attractive Tony, a DEA agent with whom she works.

Because Ms. Angelo is very clear about the mystery involved in Modi Ind0rum spanning three books, she is able to develop her characters and their relationships without rushing and so gives us real, human, and complex people to care about.

From the beginning, this is an enigmatic story. The reader knows what AJ knows and nothing more. While the reader may have ideas as to the identity of AJ’s mysterious email correspondent, there is no solution presented. The puzzle of the heroin overdoses, the possible presence of a serial killer, the significance of the numbers that appear at each death are all questions without answers in this volume.

This seems to be the beginning of a more intellectually demanding mystery. It appears that knowing something about the Fibonacci sequence may be necessary to understanding the outcome. Ms. Angelo is not shy about challenging her readers, and for this I thank her. I will admit that I used Google a lot while reading this first volume!

There is one thing that bothers me somewhat about the novel and that is the dating of the story. Each chapter begins with a date: month, day, and year. Since chapters are not in chronological order, the dating does help the reader orient him or herself. But why was it necessary to set what seem to be current events, or events that could easily happen in the present, in the future? Is this a question that will be answered in the next book or is it only a device to make the reader think there is something science-fiction about the novel?

There were also a few editing practices that I found grating. One was the constant use of italics in AJ’s mother’s speech. Was this to indicate a foreign accent? If so, it didn’t work. It is quite difficult for authors to write “accented” speech and, in most cases, it is almost better to leave this accent to the reader’s imagination. Other editing problems were minor (a couple of errors in verb tense and the expression ‘peace-meal’ instead of ‘piece-meal’) but marred an otherwise well-written novel.

I usually strongly dislike books that do not provide an ending to the stories they tell. In the case of Modi Ind0rum, I am torn. The author clearly states that the story will not come to a conclusion with the first volume, so the reader knows from the beginning that he or she will have to buy the rest of the series. That, at least, is better than letting the reader think that a conclusion is coming. I did download the next two volumes and noticed that volume 2 begins exactly where volume 1 left off, even starting with “Chapter 13”. I’m not entirely convinced that this needs to be a trilogy and not a one-volume novel.

Ms. Angelo begins with a fascinating idea, one that will probably send a lot of readers straight to Google. She builds up enough interest and curiosity to ensure readers will want to continue the series. 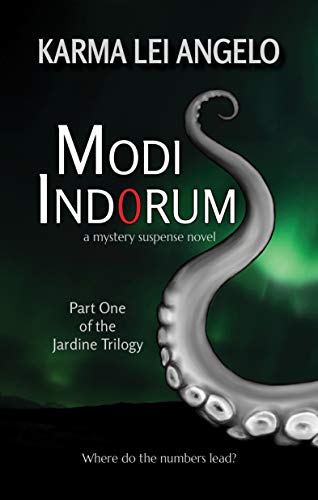