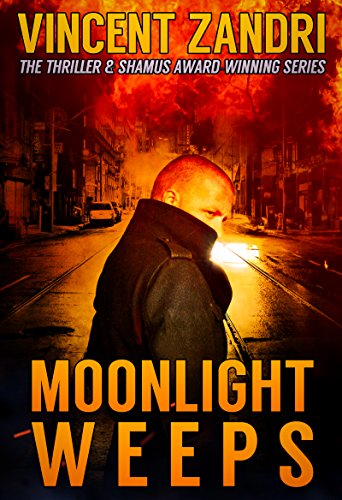 CAN PI DICK MOONLIGHT SURVIVE ANOTHER DAY WITH A BULLET LODGED IN HIS BRAIN?

Dick Moonlight can't help himself. Moonlight, the private detective known as the head case with a bullet lodged in his brain, should be grateful for his current job. But when it becomes clear the cash-starved brain surgeon he's been hired to drive around is protecting his son from a rape conviction, Moonlight is disgusted.

CAN MOONLIGHT AND HIS ELVIS IMPERSONATOR SIDEKICK SURVIVE A MURDEROUS GANG OF HOLLYWOOD OBSESSED RUSSIAN MOBSTERS?

Worse, when the charges turn into a case of "reckless murder," Moonlight's the only one trying to keep the kid from the electric chair though the girl-a state senator's daughter-clearly committed suicide. Then Moonlight and his unwilling assistant, a fat Elvis impersonator owing him money, stumble into a much bigger plot and are soon dodging Hollywood obsessed drug-running Russian thugs, corrupt government officials, and the specter of Moonlight's recently diseased girlfriend.

Scroll up now and grab your copy today!

WHAT ARE THE CRITICS SAYING ABOUT MOONLIGHT WEEPS?