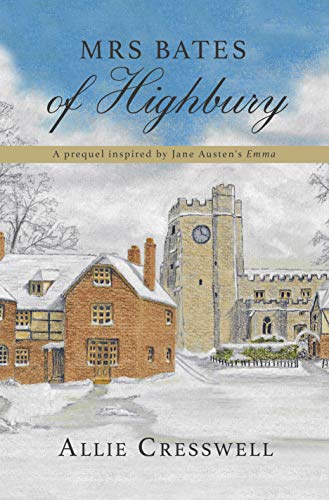 The new novel from Readers' Favourite silver medalist Allie Cresswell.
Thirty years before the beginning of 'Emma' Mrs Bates is entirely different from the elderly, silent figure familiar to fans of Jane Austen's fourth novel. She is comparatively young and beautiful, widowed - but ready to love again. She is the lynch-pin of Highbury society until the appalling Mrs Winwood arrives, very determined to hold sway over that ordered little town.
Miss Bates is as talkative aged twenty nine as she is in her later iteration, with a ghoulish fancy, seeing disaster in every cloud. When young Mr Woodhouse arrives looking for a plot for his new house, the two strike up a relationship characterised by their shared hypochondria, personal chariness and horror of draughts.
Jane, the other Miss Bates, is just seventeen and eager to leave the parochialism of Highbury behind her until handsome Lieutenant Weston comes home on furlough from the militia and sweeps her - quite literally - off her feet.
Mrs Bates of Highbury is the first of three novels by the Amazon #1 best-selling Allie Cresswell, which trace the pre-history of Emma and then run in parallel to it.