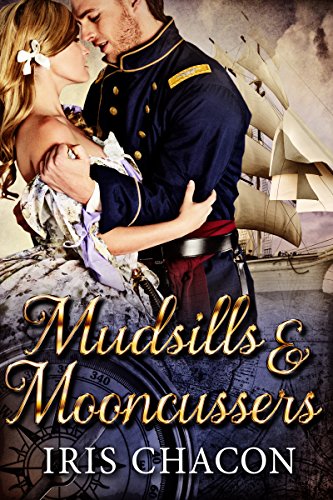 A Yankee spy on a Rebel island must kill a Rebel agent whom he fears may be his new love.
~ ~ ~
In 1860 the tiny island of Key West, southernmost tip of the United States, boasts a small, eclectic population grown wealthy salvaging merchandise from the wreckage of ships. Some Key West "Conchs" have been known to build fires on the shore north of the official lighthouse, tricking doomed ships onto the coral reefs and into the hands of waiting "wreckers." Moonless nights work best for the wreckers, earning them the sobriquet, "mooncussers." In the worst cases, mooncussers might kill - or "fail to rescue" - passengers and crew members. Dead men tell no tales.
There are no plantations and no great number of slaves on the island, still no one is more southern - geographically and philosophically - than the Conchs of Key West.
That's why it is so ironic, and more than a little vexing, that a small battalion of Northern soldiers (derided as "mudsills") one night steals into the mostly-completed Fort Zachary Taylor. When the smoke clears over Fort Sumter, SC, and the Civil War begins, the southern citizens of Key West awake to find their city occupied by Yankee soldiers without a shot fired.
For the next four years, North and South wage a tiny war, in their own unique way, on the miniscule island at the bottom of the map.
One warrior for the North is Aaron Mathews, a spy seeking to eliminate an unidentified Rebel saboteur wreaking death and destruction on Key West. Unfortunately for Aaron, all clues lead to Josephine Marie Thibodeaux, the woman he loves.
Whether the Union spy is uncovered, or the Rebel spy is revealed, the penalty for espionage will be death. For Aaron and Joe, the conflict becomes: betray my country, or betray my lover. Is there any way for both to be saved?

Believer in divine providence, salvation by grace, positive attitude, mind over matter, the benefits of regular exercise, coffee with caffeine, the anti-depressant effects of chocolate.

Ethnicity:  My ancestors came over on a boat, about three hundred years ago; currently part of a rainbow family - everything from Irish to Chinese to Maya Indian. Diversity is the beauty of humanity and the essence of heaven.

Not against dog people or cat people, but I'm more of a bunny person or horse person.

Born, raised, and residing in Florida, with friends all over the world.