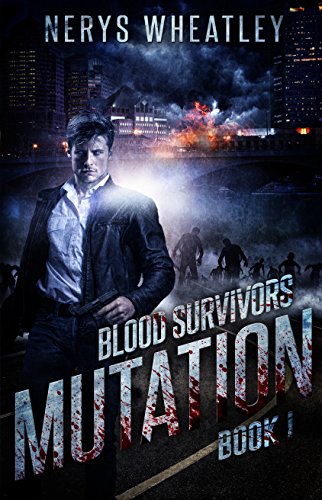 The best person to fight the monsters is someone who's been one.
When a violent mob invades cop Alex MacCallum's part of town, it's just a typical night for him and the others living there. They expect to be feared and despised - they're survivors of the virus that turns its victims into mindless flesh-eaters.

But the next day, when a new strain of the virus begins turning the population into eaters faster than ever before, Alex has to join forces with Micah, the leader of the mob, just to stay alive.

Can the two enemies survive the hordes of eaters, as well as each other, long enough to find a way to stop this new outbreak?

Mutation is the first book in a fast-moving, action-filled series that turns the zombie apocalypse on its head. If you like thrilling, original sci-fi, you'll love the Blood Survivors series.

Nerys Wheatley has an underabundance of excitement in her life and an overabundance of imagination which is constantly making up stuff in her head. She writes fast moving, action packed science fiction because she has to let the stories out somehow. She was born in the UK, which makes her spelling just that bit more thrilling. Her greatest wish is to wake up one day to find the remaining boxes from when she moved house two years ago have magically unpacked themselves. It hasn't happened yet, but she's still hoping.