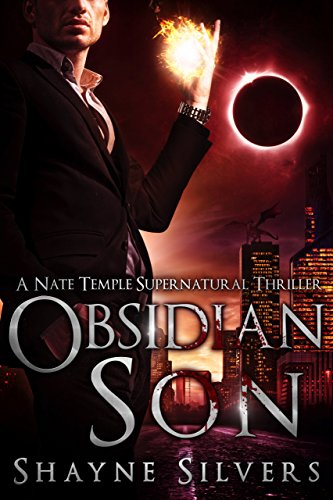 It's been said that monsters cry when a good man goes to war. But they should run screaming like little school girls when that man is secretly a wizard, and maybe not necessarilygood…

Nate Temple's all-consuming quest to avenge his parents is temporarily put on hold when shape-shifting dragons invade St. Louis. And perhaps cow-tipping the Minotaur for answers might not have been Nate's smartest opening move, because now every flavor of supernatural thug from our childhood nightmares is gunning for him. Nate learns that the only way to save his city from these creatures is to murder his best friend…Nate's choice will throw the world and his own conscience into cataclysmic chaos: avenge his parents or become a murderer to save his city? Because to do either, he's going to have to show the world that magic is very, very real, and that monsters are very, very hungry… To survive, he might just need to take a page from the book,How to Win Friends and Influence Monsters.

Click or tap BUY NOW to jump into the hellish nightmare TODAY!INTERVIEW WITH THE AUTHOR:Q: So, what makes your writing so special?
A: I wanted to write stories that mirrored the books I liked to read in my childhood. My top picks were usually urban fantasy, paranormal best sellers, and of course, books featuring your classic gritty, pulp-fiction heroes. Basically, anything with a lot of creepy crawly supernatural characters: mythical creatures, ancient heroes, super villains, and gods. You will find that my stories focus on the ancient myths, characters, and stories we all know, fear, and love. Then twist them up and toss them back like an empty beer can.
Q: Aside from Nate Temple, what other books do you write, and what order should I read them in?
A: I also write the Amazon Bestselling Feathers and Fire Series that takes place in the Temple Universe about a young female wizard named Callie who hunts monsters for the Vatican:
UnchainedRageWhispersAngel's RoarTemple Chronicles eBook categories:Dark FantasySupernatural ThrillerWitches & WizardsUrban Fantasy ThrillerSupernatural ShifterAngels & DemonsScience Fiction & FantasyParanormal and Urban RomanceSupernatural Mystery and SuspenseVampires and Werewolves
Scroll up and tap or click BUY NOW to jump face-first into this wild ride with Gods, Legends, shifters, and vampires TODAY!!

Shayne Silvers is a man of mystery and power, whose power is exceeded only by his mystery. In other words, a storyteller.

He currently writes the Nate Temple Supernatural Thriller Series, which features a foul-mouthed young wizard with a chip on his shoulder attempting to protect St. Louis from the various nasties we all know and fear from our childhood bedtime stories. Nate's been known to suckerpunch an Angel, cow-tip the Minotaur, and steal Death's horse in order to prove his point. His utter disregard for consequences and self-preservation will have you laughing and cringing on the edge of your seat.

Shayne holds two high-ranking black belts, and enjoys conversing about anything Marvel, Magical, or Mythological. You might find him writing in a coffee shop near you, cackling madly into his computer screen while pounding shots of espresso.

Get your FREE Nate Temple Starter Library TODAY at www.shaynesilvers.com