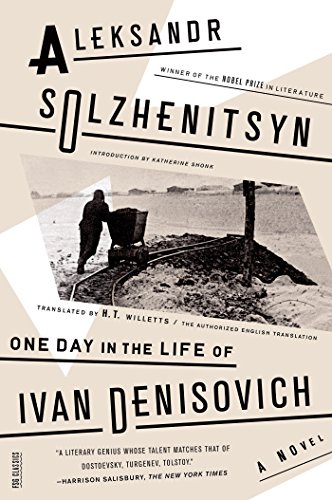 One Day in the Life of Ivan Denisovich: A Novel (FSG Classics)

The only English translation authorized by Aleksandr Solzhenitsyn

First published in the Soviet journalNovy Mir in 1962,One Day in the Life of Ivan Denisovich stands as a classic of contemporary literature. The story of labor-camp inmate Ivan Denisovich Shukhov, it graphically describes his struggle to maintain his dignity in the face of communist oppression. An unforgettable portrait of the entire world of Stalin's forced work camps,One Day in the Life of Ivan Denisovich is one of the most extraordinary literary documents to have emerged from the Soviet Union and confirms Solzhenitsyn's stature as "a literary genius whose talent matches that of Dosotevsky, Turgenev, Tolstoy"--Harrison Salisbury

This unexpurgated 1991 translation by H. T. Willetts is the only authorized edition available and fully captures the power and beauty of the original Russian.

Aleksandr Isayevich[a] Solzhenitsyn (/ˌsoʊlʒəˈniːtsɪn, ˌsɔːl-/; Russian: Алекса́ндр Иса́евич Солжени́цын, pronounced [ɐlʲɪˈksandr ɪˈsaɪvʲɪtɕ səlʐɨˈnʲitsɨn]; 11 December 1918 – 3 August 2008) (often Romanized to Alexandr or Alexander) was a Russian novelist, historian, and short story writer. He was an outspoken critic of the Soviet Union and its totalitarianism and helped to raise global awareness of its Gulag forced labor camp system. He was allowed to publish only one work in the Soviet Union, One Day in the Life of Ivan Denisovich (1962), in the periodical Novy Mir. After this he had to publish in the West, most notably Cancer Ward (1968), August 1914 (1971), and The Gulag Archipelago (1973). Solzhenitsyn was awarded the 1970 Nobel Prize in Literature "for the ethical force with which he has pursued the indispensable traditions of Russian literature". Solzhenitsyn was afraid to go to Stockholm to receive his award for fear that he wouldn't be allowed to reenter. He was eventually expelled from the Soviet Union in 1974, but returned to Russia in 1994 after the dissolution of the Soviet Union.