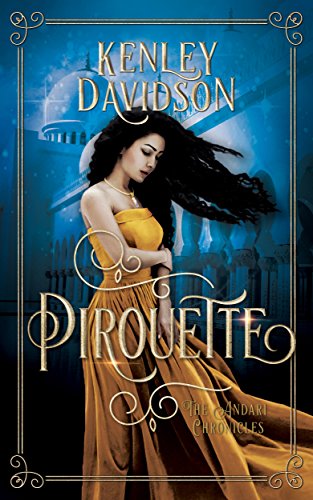 Pirouette: A Reimagining of The Twelve Dancing Princesses (The Andari Chronicles Book 3)

A stunning romantic fantasy inspired by The Twelve Dancing Princesses…

Princess Ilani is an outcast, shunned since her seventh birthday for possessing forbidden magic. But when her twelve sisters are trapped by a deception that threatens to tear their father's empire apart, Ilani must come out of hiding and join forces with a devilishly charming foreigner whose motives remain shrouded by secrecy and mistrust.

Lord Kyril Seagrave is on a covert mission into the heart of the Caelani Empire, where he finds himself adrift in a realm of impenetrable mystery and dangerous magic. Armed with nothing but determination and a set of ill-matched companions, Kyril soon realizes there is far more at stake than he could have imagined, and one misstep could prove disastrous not only to Andar, but to the beautiful and indomitable princess he would give his life to protect.

Kyril and Ilani must decide whether to trust one another as they fight for their lives, their future, and the future of Caelan itself. As darkness gathers and deadly plans come to light, the princess once forgotten by her people may be the only one who can save them from the ambitions of a treacherous adversary.

An enthralling tale of romance, adventure and suspense, Pirouette is the third book of the Andari Chronicles, a series of interconnected but stand-alone fairy tale retellings.

Kenley Davidson is a story-lover, word-nerd and incurable introvert who is most likely to be found either writing or hiding somewhere with a book. A native Oregonian, Kenley now resides in Oklahoma, where she persists in remaining a devoted pluviophile. Addictions include coffee, roller coasters, more coffee, researching random facts, and reading the dictionary (which is way more fun than it sounds). A majority of her time is spent being mom to two kids and two dogs while inventing reasons not to do laundry (most of which seem to involve books).