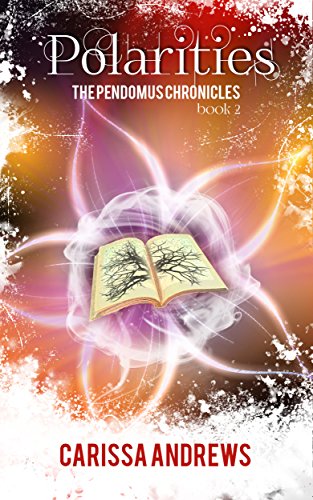 In a world where mythical creatures are either controlled, or on the brink of extinction-a prophecy reveals there's one who can restore balance. The only problem is, she has no idea how to do it.

Separated from the only people who've had her back-as well as the love of her life, Traeton-Runa must go on a quest alone to uncover what it means to be human, as well as the Daughter of Five. Dropped in an unknown location, presumably still on the planet, she only has a monolithic book-the Caudex-as her guide, but it's not giving up its answers easily. Will she be able to uncover the mysteries? The fate of the entire word rests on her shoulders and her ability to push through all of the challenges set her way.

Will she learn what she needs to step into her role as savior? Or will everything be derailed by her desire to get back to her friends?

Polarities is the second science fiction/fantasy/dystopia genre-bending novel in the Pendomus Chronicles Series. Even those who ordinarily don't like sci-fi love this series, and you will too. If you like movies like the Matrix, you'll love this fast-paced series that will stay with you for days once you're done.

To see where it all began, be sure to check out Carissa's first novel, Pendomus (Book 1 of the Pendomus Chronicles.)

BuyPolarities today to continue the transformation of Runa into the Daughter of Five.

"An author emerges from the depths of Minnesotan waters. Sci-fi/Fantasy is my pen of choice."

Carissa Andrews is a Minnesota-based genre bending author who writes a combination of science fiction, fantasy, and dystopia. When not writing her own books, she's busy reading them.

Her first novel, Pendomus, was the first of a three-part series and was published in 2013. Now, four years later, Polarities (Book 2) of the Pendomus Chronicles, and Revolutions (Book 3) have been released at the end of 2017.

For more information on their release, visit Carissa Andrews' author website: www.carissandrews.com and sign up for her newsletter notifications.

Carissa is also a freelance graphic designer, writer and content creator, social media manager, and marketing professional. She writes consistently on topics of science, technology, art, writing, photography, graphic design, health, self improvement, and more. Her articles can be found published across the interwebs. Carissa is also a Top Rated Freelancer on Upwork, and can be contacted for freelancing opportunities: http://bit.ly/UpworkCarissaAndrews