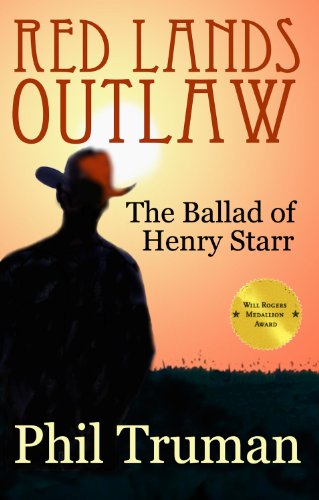 Will Rogers Medallion for Western Fiction

"A well-conceived yarn about one of the last of Oklahoma's horseback-riding outlaws. A good read." -- Dusty Richards, Spur and Wrangler Award winning author

"Author Phil Truman captured a slice of Indian Territory history and has woven it into an interesting period novel. Anyone who loves the history of the West will enjoy Red Lands Outlaw: the Ballad of Henry Starr." -- Tammy Hinton, author and winner of the Will Rogers Medallion Award for Unbridled

In the last years of the tough and woolly land called Indian Territory, and the first of the new state of Oklahoma, the outlaw Henry Starr rides roughshod through its midst. A native son of "The Nations" he's more Scotch-Irish than Cherokee, but scorned by both. Never really wanted to journey west of the law, yet fate seems to insist. He's falsely accused of horse-thieving at sixteen, sentenced to hang for murder at nineteen by Judge Isaac Parker, but escapes the gallows on a technicality. Given that opportunity, the charming, handsome, mild-mannered Henry Starr spends the rest of his life becoming the most prolific bank robber the West has ever known.