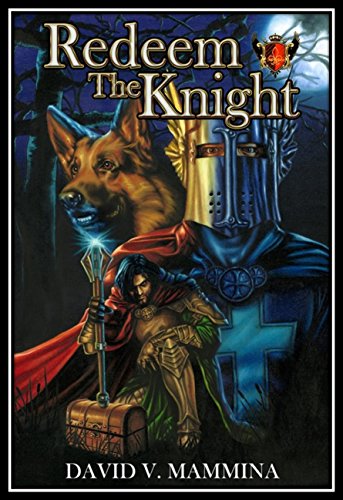 The ultimate and complete edition of the Redeem the Knight series is here. Six hundred years after the assumed apocalypse, the New Vatican has raised an army of holy knights to usher in a rehabilitated world of order and light. Equipped with the Divine Mace and the Armor of God, these knights are exclusively chosen to defend righteousness and crush rebellious evil. While the holy order sets out to portray a greater example for the rest of the rising world, one of their own falls into darkness. A holy knight has committed terrible sins of vengeance against those allegedly responsible for killing his wife and child. In turn, he has been exiled to Islandia, a nearby island, to live out his days of solitude with only a faithful dog to accompany him. This is the story of a disgraced paladin on a quest for redemption in a troubled world that needs him the most.

Included in this book:

Redeem the Knight: Vol. 1
Finally offered an opportunity to redeem himself, Arl Baelin has been called upon to inspect a series of suspicious hauntings in an infamous manor known as Midvein Mansion. However, in his quest to cleanse the mansion, he quickly realizes that his path to redemption will not be as straight forward as he had hoped.

Redeem the Knight: Blood Ties: Vol. 2
This thrilling novel continues Arl Baelin's rocky road to redemption. After a clandestine band of sorcerers known as the Crimson Hoods rise out of ambiguity to take over Islandia, Arl Baelin, the controversial paladin turned national hero, must join forces with the Rising Sirens, a rag-tag group of freedom fighters, to take it back.

Redeem the Knight: Eden: Vol. 3
It has all led to this. Called out from his refuge for a secret mission of grave importance, Baelin learns that there is no way to escape his destiny. Eden, a fabled place hidden somewhere in the high mysterious peak of Mount Gambit, bears the old world's greatest treasures. Yet, it also hides the new world's most dangerous villain. As Baelin reflects on his thrilling victories as well as his share of hurtful losses, one more test materializes-one that could save his world or very well destroy it. Before he can claim true redemption, Baelin must set out to defeat this wicked foe so evil that some dare not speak his name. Others deny that he even exists at all. In a final and deeply personal campaign to defeat his nemesis once and for all, the holy knight takes on his greatest challenge yet in a battle that holds all of the new world in the balance.

Brought to you by the author who wrote The Angels of Resistance, David V. Mammina welcomes you to his version of the future. Paladins, witches, werewolves, vampires, warlords, cannibal cultists, freedom fighters...This is a read you won't regret picking up.

David V. Mammina lives in Lindenhurst, NY and teaches Social Studies to students with learning disabilities in Queens. He is the author of seven fiction novels and the recipient of the Presidential Service Award for his volunteer work in the community. He enjoys connecting with avid readers and other independent authors, as well as dabbling in video games and comics. Please feel free to reach out to him and take a look at his website to learn more.