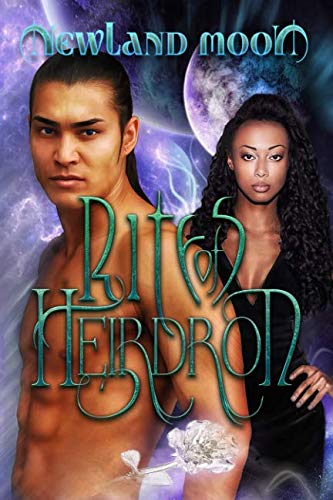 ~D. Donovan, Midwest Book Review"Rites of Heirdron is a powerful fantasy telling. Its dual focus on changing worlds and hearts moves deftly from personal to political realms. It's a recommended pick for readers who like their sci-fi spiced with more than light romance, but who want that romance wrapped in the heavier cloak of sacrifice, duty, and life-changing decisions."

~Romuald Dzemo for Readers' Favorite"Newland Moon has the gift of integrating strong themes like love, friendship, loyalty, faith, and redemption into a beautiful story in a seamless manner. The writing is flawless, crisp and tight, with vivid descriptions that capture the intense action excellently.

"They poisoned his planet, massacred his people, and violated his mother. Now, they're coming for him.

Abastard prince, born to a dishonored queen, Zrahnz is the last hope of a dying world nearly decimated after a treacherous interplanetary betrayal. He struggles to reclaim his legitimacy as a ruler and for his planet's survival. But as he endeavors to unravel the manipulations of the past, a debilitating malady threatens his sanity and his life. If he cannot save himself, his planet will succumb to the corrupt intergalactic alliances aligned against them.

The irrepressible allure he feels for an Earth-born visitor, Itanya, threatens to overwhelm him, yet through her, Zrahnz discovers the secret that can ease the devastating agony of his illness. Could she be the key to his survival and the future of Triaxeyn?

WithQ-1 Raydren at his side, and with the influence of the Oracles, he discovers corrupted truths and a forgotten prophecy. But he must make a crucial, life-saving decision, or else his people and everyone he loves could be destroyed.

Deridedas a "kahtdrol," "the unclaimed," and "the prince of nothing," he was denied his rule, denied his birthright, and denied the one truth that would save his life.

Aaron-Michael Hall is an award-winning author residing in Georgia. She writes classic epic fantasy with a grimdark edge and science fantasy romance. Since August 2015, she has written nine full-length novels and published five. Her first novel, The Rise of Nazil has won numerous reader awards.

Now, when she is not interviewing indie authors on her Desu Beast Blog, being super mom, wrangling stampeding miniature dachshunds, or managing her 9 to 5, she is interweaving genres, creating languages, and adding just the right edge to keep you turning pages.

When asked why she wrote this series, Aaron-Michael simply said, “It needed to be written.”

It is her hope that the readers enjoy the wonders of Faélondul and Ahmezurhran even more than she enjoyed writing about them.