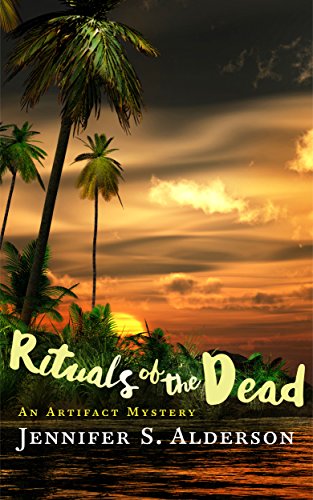 Rituals of the Dead: An Artifact Mystery Book Review

Rituals of the Dead: An Artifact Mystery (Adventures of Zelda Richardson Book 3)

Stolen artifacts, a missing anthropologist and a tenacious amateur sleuth.

American art history student Zelda Richardson is back and embroiled in another exciting art-related mystery! This time she's working at an anthropology museum in Amsterdam on an exhibition of artifacts from the Asmat region of Papua - the same area where a famous American anthropologist disappeared in 1961. When the anthropologist's journal is found inside an artifact's crate, Zelda is tasked with finding out more about the man's last days and his connection to these ritual objects.

Trouble is, she soon discovers disturbing links between his vanishing, the Dutch government and the Catholic Church. When her co-worker and housemate are murdered shortly after, Zelda finds herself pulled into a world of shady anthropologists, colonial officials, missionaries and smugglers - where the line between good and evil is blurry at best, and the only certainty is that sins of the past are never fully erased.

Join Zelda on her next quest as she grapples with the anthropologist's mysterious disappearance fifty years earlier, and a present-day murderer who will do everything to prevent her from uncovering the truth.

Art, religion, and anthropology collide in this edge-of-your-seat museum thriller, Book Three of theAdventures of Zelda Richardson mystery series. The novels in this series can be read in any order.

Jennifer S. Alderson was born in San Francisco, raised in Seattle, and currently lives in Amsterdam. After traveling extensively around Asia, Oceania, and Central America, she moved to Darwin, Australia, before finally settling in the Netherlands. Her background in journalism, multimedia development, and art history enriches her novels. When not writing, she can be found in a museum, biking around Amsterdam, or enjoying a coffee along the canal while planning her next research trip.

The Lover’s Portrait (Book One) is a suspenseful whodunit about Nazi-looted artwork that transports readers to WWII and present-day Amsterdam. Art, religion, and anthropology collide in Rituals of the Dead(Book Two), a thrilling artifact mystery set in Papua New Guinea and the Netherlands. Her pulse-pounding adventure set in the Netherlands, Croatia, Italy, and Turkey—Marked for Revenge (Book Three)—is a story about stolen art, the mafia, and a father’s vengeance.

She is also the author of two adventure thrillers: Down and Out in Kathmandu and Holiday Gone Wrong. Her travelogue, Notes of a Naive Traveler, is a must read for those interested in traveling to Nepal and Thailand. All three are part of the Adventures in Backpacking box set.