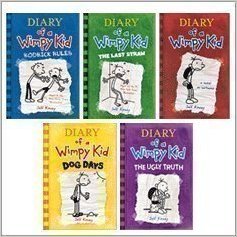 Rodrick Rules is the hilarious sequel to bestselling and award-winning Diary of a Wimpy Kid. Perfect for readers of 8+, reluctant readers and all the millions of Wimpy Kid fans out there. Rodrick Rules was also a major movie hit at the box-office and the rib-tickling third Wimpy Kid movie, Dog Days released in the UK in August 2012.

Whatever you do, don't ask Greg about his summer vacation because he definitely doesn't want to talk about it . . .

It's a brand-new year and a brand-new journal and Greg is keen to put the humiliating (and secret!) events of last summer firmly behind him.

But someone knows everything - someone whose job it is to most definitely not keep anything embarrassing of Greg's private - his big brother, Rodrick. How can Greg make it through this new school year with his not-quite-cool reputation intact?

Jeff Kinney is a #1 New York Times bestselling author and six-time Nickelodeon Kids’ Choice Award winner for Favorite Book. The 11th book in the series, Diary of a Wimpy Kid: Double Down, will release on November 1, 2016. The first-ever theatrical adaptation of Diary of a Wimpy Kid was staged by the prestigious Minneapolis Children’s Theatre Company from April to June, 2016. It earned rave critical reviews and had sold out shows. Jeff has been named one of Time magazine’s 100 Most Influential People in the World. He is also the creator of Poptropica, which was named one of Time magazine’s 50 Best Websites. Jeff spent his childhood in the Washington, D.C., area and moved to New England in 1995. He lives with his wife and two sons in Plainville, Massachusetts, where he owns a bookstore, An Unlikely Story.