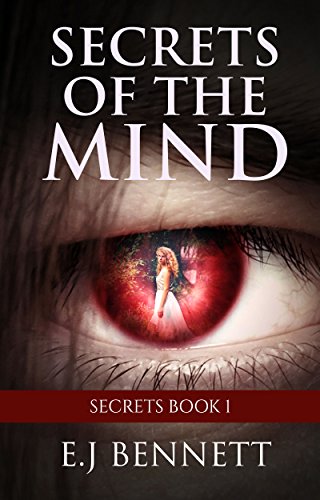 Secrets of the mind (Secrets book 1)

Kayla Wilson has no memory of her childhood. Found alone and lost in the middle of the woods at the young age of eight. The Wilson's take her in, treating her as their own.
Nightmares plague Kayla every night as she sleeps. Shopping with her best friend, her nightmares become reality sending her life out of control.
She is thrust into a new life where her nightmares become more real with each day that passes. She learns there is more to the world than she ever thought possible. Stories and legends all have some truths to them and unfortunately for Kayla she is a part of this new world whether she wants to be or not. She must adapt and fight for her life as a threat awaits her around every corner.
Can Kayla handle her new life and survive the evil of the world?
Can she uncover the secrets of her past?

E. J Bennett is the author of the YA/Fantasy novel, Secrets of the mind and also the children's book author My little brother which features her own children.

E.J Bennett is a stay at home mom of two young children, a girl age 5 and a boy age 2. Due to her little boy been born with a bilateral cleft lip and palate, E. J Bennett found that she has no time for a full time job.

She wanted to do more with her life than be a stay at home parent. She wrote her first children's book My little brother to help other children and families who are expecting or have a baby born with a cleft lip. Although cleft lip and palate defects are one of the most common birth defects she felt there was not much information out there, especially for young children like her daughter who did not fully understand why her baby brother had a poorly mouth.

E.J Bennett lives in an old mining village in South Yorkshire England and loves to spend time at the holiday resort Skegness.

She loves to write and is looking forward to realising Book 2 in her Secrets series, hopefully in the next six to eight months.