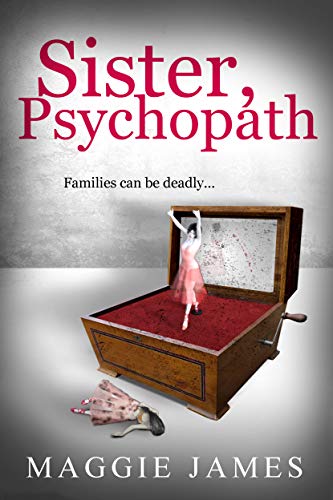 Families can be deadly...

When they were children, Megan adored her younger sister Chloe. Now she can’t bear to be in the same room as her.

Megan believes Chloe is a psychopath and her sister appears to be a textbook case: cold, cruel and lacking in empathy.

Why does Chloe taunt Megan at every opportunity?  And why does she persist in manipulating their mentally ill mother, Tilly?

When Tilly, under Chloe’s malignant influence, becomes dangerously unstable, the consequences are ugly. Megan’s world falls apart. Her sister’s out of control and there’s little she can do about it. Until Chloe’s actions threaten the safety of Megan’s former lover, a man from whom she has kept an important secret.

A study of sibling rivalry and dysfunctional relationships, Sister, Psychopath tells of one woman's struggle to survive the damage inflicted by her own flesh and blood.

Maggie James is a British author who lives near Newcastle-upon-Tyne. She writes psychological suspense novels.

Before turning her hand to writing, Maggie worked mainly as an accountant, with a diversion into practising as a nutritional therapist. Diet and health remain high on her list of interests, along with travel. Accountancy does not, but then it never did. The urge to pack a bag and go off travelling is always lurking in the background! When not writing, going to the gym, practising yoga or travelling, Maggie can be found seeking new four-legged friends to pet; animals are a lifelong love!