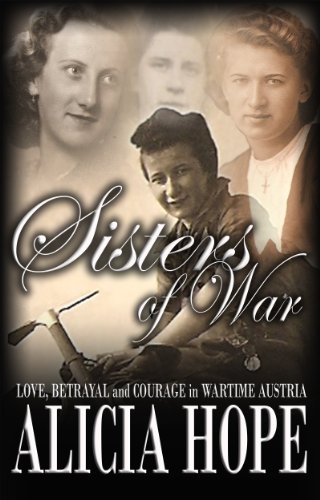 SISTERS OF WAR, a novella.
A tale of betrayal and courage in wartime Austria, of five women who lived, loved and lost under the ever-watchful eye of the Third Reich.

To fourth generation Australian Elise, world war two felt surreal, like the vague memory of an old black and white movie. Fuzzy facts and grainy images indistinguishable from those of childhood bad dreams. But sitting at the bedside of her critically ill mother-in-law, she was about to learn the harsh reality of what had happened during those dark times, from the lips of someone born in one of the darkest of dark places….

Did these horrors really happen a mere generation ago?

Once you choose HOPE, anything is possible….

Alicia Hope lives in Queensland, Australia, with her author husband and their much-loved pet ‘tiel’ (cockatiel). Bass playing, scuba diving, bird and horse loving Alicia lives on coastal acreage dotted with Australia’s famous gum trees and frequented by the wildlife she adores. Her feel-good stories are mostly set in Australia, with many of them inspired by her love of the land and the natural world. She likes to imagine readers curled up and engrossed in one her books on a rainy afternoon, or any time!

You can connect with Alicia online at http://www.aliciahopeauthor.blogspot.com