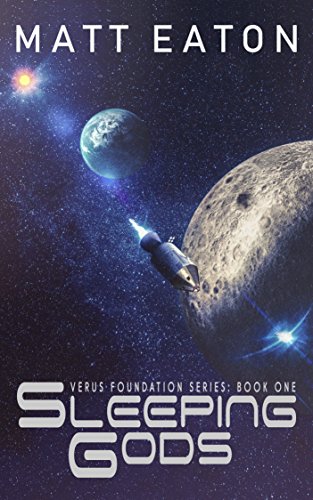 The first men to fly to the Moon see something strange. Apollo 8 commander Frank Borman doesn't tell NASA - because he's already been sworn to secrecy.

From Borman's perspective in lunar orbit, the Earth looks lonely and fragile in the blackness of space. Lonely, but not alone - the far side, permanently hidden from Earth, is a perfect place to hide.

Sleeping Gods puts you inside the capsule on a mission so audacious the astronauts were only given a 50-50 chance of making it home alive.

If you've ever dreamed of flying to the Moon, take a trip with the men who did it.

But could there really be a secret these astronauts have guarded for half a century?

Remarkable though their flight proves to be, Borman's journey becomes even more bizarre after splashdown.

NEW RELEASE: Go one step beyondSleeping Gods with Frank Borman on a space journey kept secret from the world, inApollo 8.1.

Matt Eaton lives in Brisbane, Australia and is an author of fiction and a journalist of fact. When he’s not making stuff up, he works for the Australian Broadcasting Corporation (ABC) digital news service.

He’s worked in the media for more than 30 years, including seven years at the ABC’s youth radio network Triple Jay, where he was a news reader and reporter, making travel docos and tripping around the world covering pro surfing events. These days, Matt enjoys a quieter life in Brisbane. He likes swimming, walking, reading, as well as devouring the best shows on Netflix with his wife and daughters. He’s a lover of both kinds of music — rock and jazz.