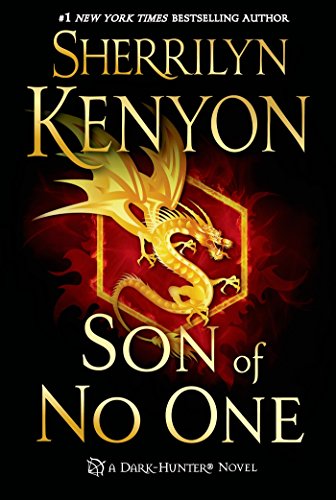 Son of No One (Dark-Hunter Novels Book 18)

In theNew York Times bestseller,Son of No One, part of the blockbusterThe Dark-Huntersseries by Sherrilyn Kenyon, it's not easy being life's own personal joke, but Josette Landry has made an unstable peace with the beast. Completely down on her luck, Josette takes a job with a local paranormal group as a photographer and camerawoman. Yeah, they're even crazier than she is. The only paranormal thing she believes in is the miracle that keeps her rusted-out hoopty running. But when something truly evil is released into the world, they are forced to call in reinforcements.

From the moment Josette meets Cadegan, she knows something about him isn't quite right. Mysterious and armed with lethal sarcasm, he seems a lot older than his age.

Centuries ago, Cadegan was viciously betrayed into an immortal prison by the only person he'd ever trusted and was cast into an immortal prison. Forced against his will to do good, he hates everything in life. All he wants is a way out. But for the damned there is only eternal suffering. And yet there is something about Josette that intrigues him. Something he can't seem to fight and the last time he felt this way about a woman, it cost him everything.

He knows he has to stay away from her, but the unleashed demon is hell-bent on consuming her soul. If one more innocent is taken, he will be sent back to an unimaginable prison that makes his current hell look like paradise. But how can he keep her safe when his being with her is the greatest threat of all?

The #1 New York Times bestselling author, Sherrilyn Kenyon, who is proud of her mixed Cherokee heritage, lives a life of extraordinary danger… as does any woman with three sons, a husband, a menagerie of pets and a collection of swords that all of the above have a major fixation with. But when not running interference (or dashing off to the emergency room), she’s found chained to her computer where she likes to play with all her imaginary friends. With more than thirty million copies of her books in print, in over one hundred countries, she certainly has a lot of friends to play with too.

Her books appear regularly at the coveted #1 bestselling spot. This extraordinary bestseller continues to top every genre she writes. Her current series include: The Dark-Hunters, The League, Chronicles of Nick and Beladors. Since 2004, she has placed more than 80 novels on the New York Times list in all formats including manga.