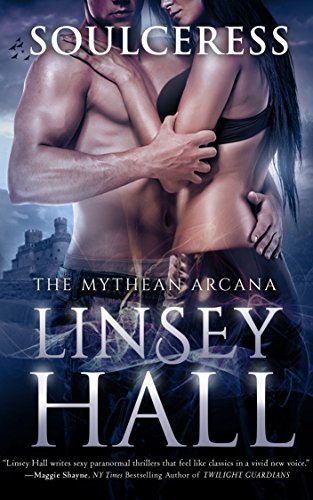 He hates what she is
Three hundred years ago, Warren sold his soul in exchange for the safety of his people. He lives immortal and inhuman, a life in the shadows, hiding his secrets. Until now, when he finally has the chance to reclaim his soul after three centuries of suffering…

She's wanted him forever
Esha is a soulceress, an immortal who drains the magical powers of others. Shunned by everyone she meets, she's a rogue mercenary who hunts evil for a living. The only man she cannot harm is Warren, and she's wanted since she first met him. The only problem? He hates what she is as much as everyone else.

A passion they want to resist--but can't
Esha is the only person who can help Warren reclaim his soul, but the simple quest soon becomes a deadly battle fraught with secrets that could tear them apart. Warren will have to rely on the woman he wishes he didn't want-one whom he can't resist. But Esha isn't going to settle for so little this time around. She's going to make him work for it.

Warning: Explicit love scenes and adult language ahead! Turn back now if these aren't your style.

Before becoming a writer, Linsey was an archaeologist who studied shipwrecks in all kinds of water, from the tropics to muddy rivers (and she has a distinct preference for one over the other). After a decade of tromping around in search of old bits of stuff, she settled down to started penning her own adventure novels and is freaking delighted that people seem to like them. Since life is better with a little (or a lot of) magic, she writes urban fantasy and paranormal romance.

Learn about Linsey's new books by joining her newsletter at www.linseyhall.com/subscribe