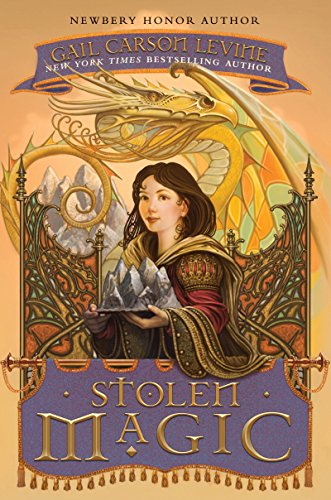 Elodie, the dragon detective Meenore, and the kindly ogre Count Jonty Um are all on their way to Elodie's home island of Lahnt.

Elodie has barely set foot on land before she learns that the Replica, a statue that keeps her island's deadly volcano from erupting, has been stolen! If the Replica isn't found in three days, a mountain will be destroyed. And when Elodie ends up alone with a cast of characters that may all be guilty, she has to use her wits to try to unravel a tangled web of lies.

New York Times bestselling author Gail Carson Levine has written an imaginative, fast-paced mystery that will be enjoyed by fans ofA Tale of Two Castles, as well as those meeting Elodie, Meenore, and Count Jonty Um for the first time.

Gail Carson Levine grew up in New York City and has been writing all her life. Her first book for children, Ella Enchanted, was a 1998 Newbery Honor Book. Levine's other books include Dave At Night, an ALA Notable Book and Best Book for Young Adults; The Wish; The Two Princesses of Bamarre; and her Princess Tales books: The Princess Test, The Fairy's Mistake, Princess Sonora and the Long Sleep, Cinderellis and the Glass Hill, For Biddle's Sake and The Fairy's Return. She is also the author of the picture book Betsy Who Cried Wolf, illustrated by Scott Nash. Gail, her husband, David, and their Airedale, Baxter, live in a two-hundred-year-old farmhouse in the Hudson River Valley.

In Her Own Words..."I grew up in New York City. In elementary school I was a charter member of the Scribble Scrabble Club, and in high school my poems were published in an anthology of student poetry. I didn't want to be a writer. First I wanted to act and then I wanted to be a painter like my big sister. In college, I was a Philosophy major, and my prose style was very dry and dull! My interest in the theater led me to my first writing experience as an adult. My husband David wrote the music and lyrics and I wrote the book for a children's musical, Spacenapped that was produced by a neighborhood theater in Brooklyn.

"And my painting brought me to writing for children in earnest. I took a class in writing and illustrating children's books and found that I was much more interested in the writing than in the illustrating.

"Most of my job life has had to do with welfare, first helping people find work and then as an administrator. The earlier experience was more direct and satisfying, and I enjoy thinking that a bunch of people somewhere are doing better today than they might have done if not for me."