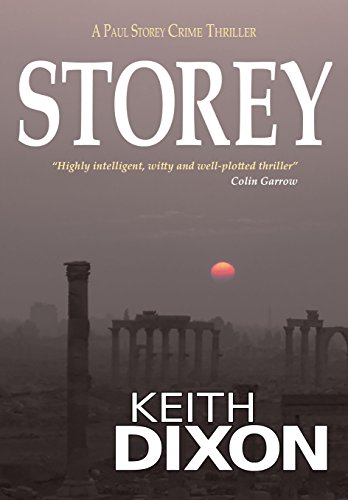 Paul Storey used to be a cop. His specialism? Killing people. Who would want him now? As it turns out, nearly everyone.

When Paul Storey comes home from London he's escaping an event that ruined his professional life. Now he's slowly making contact with people again … but the people he meets are lowlifes, thieves and conmen.

Exactly the kind of people he was trying to escape.

When he gets involved in a scam to sell smuggled antiquities from Syria he realises he can't escape being a professional either-and one with a specialised skill that makes him even more desirable to his new colleagues.

Finding a purpose in life while keeping his head connected to his shoulders keeps him busy, until a Syrian who wants the return of one of the stolen antiquities shows up ... and he's not inclined to take prisoners …

Storey is a crime thriller that features action, intriguing characters, a surprising plot (or two) and a touch of comedy. Keith Dixon has been compared to Ian Rankin and Lee Child and he's very happy with that.

Click the buy button to downloadStorey today!
"Quite the most readable writer working in the genre today."