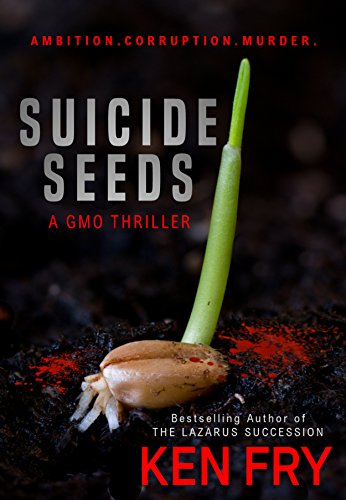 AMBITION. CORRUPTION. MURDER.
From the bestselling author of The Lazarus Succession comes a hard-hitting, sentimental thriller you'll find hard to put down.

The fate of The Gambia, and maybe the rest of the world, rests on the shoulders of an ambitious man. Will he give up his dreams to do the right thing? Or will that cup of rice be your last?

Lloyd Olsen, a top executive of NewCrop, a western producer of genetically engineered (GE) seeds, is sent to the Gambia to head the company's operation. The company has developed a new strain of rice, GRX, which promised to end the famine in West Africa. Olsen leaves everything behind for the promise of a CEO position.

Little did he know that the supposed "Holy Grail of Biotechnology" is anon-seeding, nightmare crop... dubbed the Suicide Seed.

A seed that could feed the hungry millions...
But a seed that kills itself and all other natural seeds in its proximity.
Giving NewCrop full control of West Africa's agricultural supply.

Olsen discovers NewCrop's real agenda when his life and those of the people he cares about isthreatened by a fanatic hired by a corrupt government officialin The Gambia to protect the contract. The body count starts piling up.

He must decide... join the conspiracy, or give up his dreams and fight?