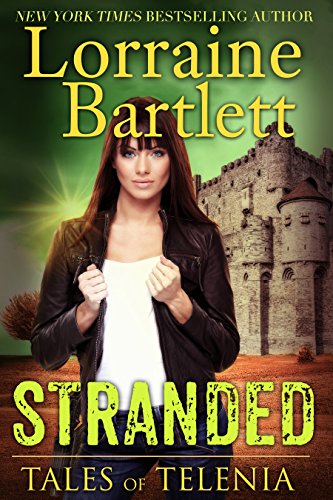 One crash landing. One strange planet. And the chauvinists who inhabit it.

When her interplanetary shuttle encounters a spatial rift and crash lands on god-forsaken Telenia, the clever and adventurous Amanda Sheldon is held captive by Prince Paxdon. Forcing her to learn their language, Paxdon wants nothing more than to exploit her knowledge, advancing Telenia's technological needs and to use it against his enemies.

Stifled by the male-dominated society and their condescending viewpoints, Amanda sets out to prove that women should be heard and honored--not dismissed. Although she possesses the knowledge they need to usurp a sinister enemy and save countless innocent lives, the Telenians refuse to accept her intelligence and leadership. Will Amanda find a way to convince a planet of chauvinistic men to cross the threshold and put their trust in a woman?

The immensely popular Booktown Mystery series is what put Lorraine Bartlett’s pen name Lorna Barrett on the New York Times Bestseller list, but it’s her talent--whether writing as Lorna, or L.L. Bartlett, or Lorraine Bartlett -- that keeps her in the hearts of her readers. This multi-published, Agatha-nominated author pens the exciting Jeff Resnick Mysteries as well as the acclaimed Victoria Square Mystery series, the Tales of Telenia adventure-fantasy saga, and now the Lotus Bay Mysteries, and has many short stories and novellas to her name(s). Check out the descriptions and links to all her works, and sign up for her emailed newsletter here: http://www.lorrainebartlett.com