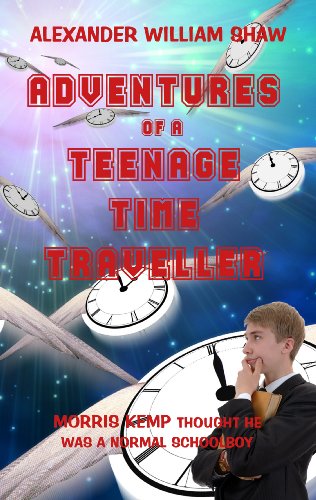 The Adventures of a Teenage Time Traveller

At Isambard Kingdom Brunel High School it's time for the year ten pupils to go on their compulsory 'work placements' and Morris Kemp is not happy. Placed for what he thinks will be two 'boring weeks' with Longman & Short 'Double Glazing', Morris is taken out to visit potential customers by his mentor 'Huxley'.

Events however take a very strange and rather comic turn when the very first customer Morris meets gives him 'magic beans' instead of cash, claiming them to be not beans but 'time travel pods'.

Thinking it is all a 'big joke' Morris chews a bean and is suddenly thrown back in time to the Shakespearian age where he must find a way to help 'Willamina' Shakespeare complete her latest play before returning once more to the twenty first century.

However things go wrong and he becomes trapped in time as villains from the past and the future try to steal his magic beans!

In addition to Willamina Shakespeare and Queen Elizabeth I, Morris encounters the President of Europe (in the 2650), Alien Security Guards, an Assassin/Hairdresser and the entire Royal Family of Atlantis.

Can Morris ever return home, and will his life ever be the same again? Read this time travel comedy and find out!