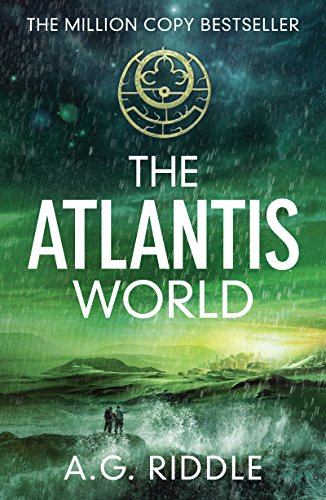 A mysterious signal from deep space could be humanity's last chance of survival. And reveal the ultimate secret of our origins.


The Atlantis World is the third book inTHE ORIGIN MYSTERY, a trilogy that has sold over THREE MILLION COPIES worldwide.


Northern Morocco: Dr. Kate Warner cured a global pandemic, and she thought she could cure herself. She was wrong. And she was wrong about the scope of the Atlantis conspiracy. Humanity faces a new threat, an enemy beyond imagination. With her own time running out and the utter collapse of human civilization looming, a new hope arrives: a coded message from a potential ally.


Arecibo Observatory: Mary Caldwell has spent her life waiting, watching the stars, looking for signs of intelligent life beyond our world. When that day comes, Mary is thrust into a struggle older than the human race, with far greater stakes. She must decide whom to trust because there is nowhere to hide.


Antarctica: In the wake of the Atlantis Plague, Dorian Sloane finds himself a puppet to Ares and his mysterious agenda. When Dorian moves to take control of the situation, Ares unleashes a cataclysm that changes everything. As the catastrophe circles the globe, Ares reveals the true nature of the threat to humanity, and Dorian agrees to one last mission: find and kill David Vale and Kate Warner. There will be no prisoners this time. The orders are seek and destroy, and Dorian has been promised that his own answers and salvation lie on the other side.


With Dorian in pursuit, Kate, David, and their team race through the ruins of the Atlantean ship left on Earth, across Atlantean science stations throughout the galaxy, and into the past of a mysterious culture whose secrets could save humanity in its darkest hour. With their own lives on the line and time slipping away, Kate, David, and Dorian are put to the ultimate test.


"...reads like a superior collaboration between Dan Brown and Michael Crichton."
-The Guardian onPANDEMIC


"I finished the book fast because I just couldn't wait..."
-GeekDad onDEPARTURE


"Riddle (The Origin Mystery trilogy) makes an effort to keep the focus on how his characters react to each other (including to their future selves) rather than to the technological marvels that reshaped their world."
-Publisher's Weekly onDEPARTURE


"Well-constructed and tightly-wound as a fine Swiss watch-DEPARTURE has non-stop action, an engaging plot and, of course, wheels within wheels."
-Diana Gabaldon, bestselling author of Outlander onDEPARTURE


The Atlantis World is an adventure across space and time that explores the history of the Atlantean homeworld and culture, a topic readers have asked about since the release of the first novel in the series,The Atlantis Gene. Fans of Dan Brown, Michael Crichton, Preston and Child, Robert Masello, and James Rollins are raving about the trilogy, giving it over 25,000 reviews on Amazon and nearly 100,000 ratings on GoodReads. This heart-stopping thriller is the third and final book in A.G. Riddle'sOrigin Mystery Trilogy, which is now complete.


A.G. Riddle's novels have sold over three million copies and been published around the world in twenty languages. Several movie studios have optioned his work, including Twentieth Century Fox (Departure) and CBS Films (The Origin Mystery). When he's not writing, he can be found reading a book, mountain biking, or chasing his two-year-old daughter around the house yelling, "Stop! What do you have in your mouth?"