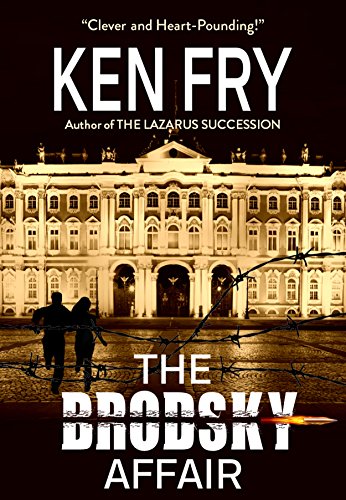 The Brodsky Affair: A Thriller

Lost Art. Murder. A collector who will stop at nothing.
Grab the edge of your seat as Ken Fry weaves a tale of murder, mystery and intrigue.
*** RUNNER UP - UK International Novel Writing Competition 2017

"From go to whoa, it was a book that carried you along on a tumultuous ride through the high-powered circles of the art elite."

" I found the setting here to be tremendously powerful. The mystery itself is classy and intelligent, and develops into a killer of a finale…. Try this one if you like your art-heist thrillers to be gritty, real, and steeped in history."

ON TO THE STORY...
Jack Manton, an art dealer, and his partner, Tamsin Greene, did not expect to betargets of assassination attempts. But, when they begin to track down the lost paintings of Russian artist, Mikhail Brodsky, now worth millions... that is what happened.

Berezin, a partially disabled, entrepreneurial Russian criminal, murderer and art thief, employs a deadly and vicious ex-Soviet agent to follow Manton and use whatever means necessary to steal what he finds.

The chase moves from Australia to UK, to Russia and France, as Interpol attempts to unravel a complex trail of murders and art thefts.

Jack Manton faces a perilous path of murder and deceit, before Brodsky's last unfinished work is revealed, and its destiny decided at a final confrontation.