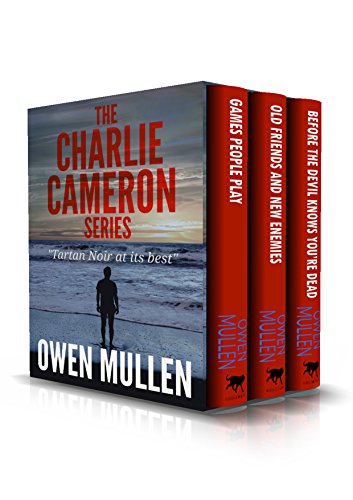 Thirteen-month-old Lily Hamilton is abducted from Ayr beach in Scotland while her parents are just yards away.

Three days later the distraught father turns up at private investigator Charlie Cameron's office. Mark Hamilton believes he knows who has stolen his daughter. And why.

Against his better judgment Charlie gets involved in the case and when more bodies are discovered the awful truth dawns: there is a serial killer whose work has gone undetected for decades.

Is baby Lily the latest victim of a madman?

For Charlie it's too late, he can't let go.

His demons won't let him.

The body on the mortuary slab wasn't who Glasgow PI Charlie Cameron was looking for.

But it wasn't a stranger.

Suddenly, a routine missing persons investigation becomes a fight for survival. As Charlie is dragged deeper into Glasgow's underbelly he goes up against notorious gangster Jimmy Rafferty and discovers what fear really is.

Rafferty is so ruthless even his own sons are terrified of him.

Now he wants Charlie to find something. And Jimmy Rafferty always gets what he wants.

There is only one problem... Charlie doesn't know where it is.

Before the Devil Knows You're Dead:

Gavin Law was a whistleblower.

Just another case for Glasgow PI, Charlie Cameron, until he discovers there is more to Law and his disappearance than anyone imagined.

Wallace Maitland, the surgeon responsible for leaving a woman brain-damaged may have abandoned his sacred oath and become a killer. Did the hospital which refused to accept responsibility for the tragedy have Law silenced permanently? Or, with his wife little more than a vegetable, has David Cooper, believing he has been betrayed yet again, taken justice into his own hands?

Charlie comes to realise the world of medicine can be a dangerous place.

Across the city, East End gangster, Sean Rafferty is preparing to exploit the already corrupt city council in a multi-million pound leisure development known as Riverside. The project will be good for Glasgow. But not everybody is keen to work with Rafferty.

With more than money at stake, Sean will do anything to get his way. His motto, borrowed from his old man, is simple. Never take a no from somebody who can give you a yes.

If that means murder, then so be it.

Charlie has crossed Rafferty's path before and lived to tell the tale.

He may not be so lucky a second time.