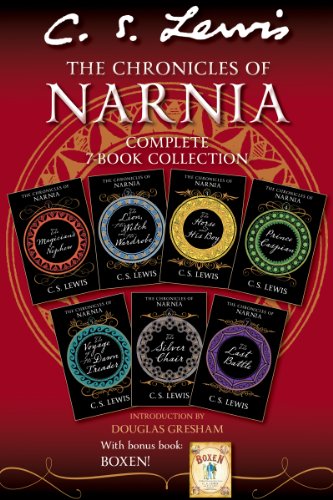 The Chronicles of Narnia Complete 7-Book Collection: All 7 Books Plus Bonus Book: Boxen

This collection contains all seven books in the classic fantasy seriesThe Chronicles of Narnia without art, to appeal to older readers. This special ebook edition includes an introduction by C. S. Lewis's stepson, Douglas Gresham, and full text and art for Lewis's very first work-Boxen!

Experience C. S. Lewis'sThe Chronicles of Narnia in its entirety-The Magician's Nephew;The Lion, the Witch and the Wardrobe;The Horse and His Boy;Prince Caspian;The Voyage of the Dawn Treader;The Silver Chair; andThe Last Battle. This bundle comes with a special introduction by Douglas Gresham, C. S. Lewis's stepson, for a behind-the-scenes look at Lewis while he was writing the book.

The Chronicles of Narnia has become part of the canon of classic literature, drawing readers of all ages into magical lands with unforgettable characters for over sixty years. Epic battles between good and evil, fantastic creatures, betrayals, heroic deeds, and friendships won and lost all come together in this unforgettable world.

And then discover the world before Narnia withBoxen, a collection of stories written by C. S. Lewis and his brother when they were children, with the authors' own delightful illustrations. For every reader who has been captivated by the magic of Narnia,Boxen will open a window to another enchanted land and offer the first glimmer of C. S. Lewis's amazing creativity.

Clive Staples Lewis (1898–1963) was one of the intellectual giants of the twentieth century and arguably one of the most influential writers of his day. He was a Fellow and Tutor in English Literature at Oxford University until 1954, when he was unanimously elected to the Chair of Medieval and Renaissance Literature at Cambridge University, a position he held until his retirement. He wrote more than thirty books, allowing him to reach a vast audience, and his works continue to attract thousands of new readers every year. His most distinguished and popular accomplishments include Mere Christianity, Out of the Silent Planet, The Great Divorce, The Screwtape Letters, and the universally acknowledged classics The Chronicles of Narnia. To date, the Narnia books have sold over 100 million copies and been transformed into three major motion pictures.