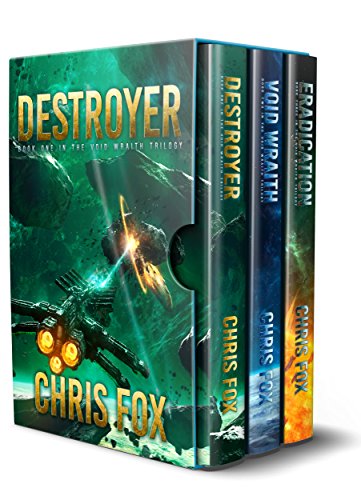 Mankind's outer colonies are disappearing. Without warning. Without a trace. Fleet command chalks the attacks up to pirates, but Captain Dryker of the UFC Johnston isn't buying it.

Defying command, he leads his misfit crew into hostile territory in search of answers. They encounter the mythical Void Wraith, an unstoppable legend whispered by the first race. After 26,000 years the Void Wraith have returned to begin the next Eradication. Their technology is superior, their motives unclear.

Humanity cannot stop them. Not without help. Captain Dryker's only hope is to forge an alliance with mankind's greatest enemy, the savage Tigris.

One maverick captain, an unlikely crew, and an aging vessel are all that stand between humanity and the Eradication.

"It's like Battlestar Galactica and Mass Effect had a baby, and that baby was raised by Starcraft. I read this book in one sitting, and immediately looked for the next."- The author's totally biased friend.

This trilogy has a sequel! The story continues in Behind the Lines.

Check out cover art, updates and more at chrisfoxwrites.com

By day I am an iPhone developer architecting the app used to scope Stephen Colbert's ear. By night I am Batman. Ok maybe not. One can dream though, right?

I've been writing since I was six years old and started inflicting my work on others at age 18. By age 24 people stopped running away when I approached them with a new story and shortly thereafter I published my first one in the Rifter.

Ok, the facts I'm supposed to list in a bio. As of this writing I'm 38 years old and live just north of the Golden Gate Bridge in the beautiful town of Mill Valley. If you're unsure how to find it just follow the smell of self-entitlement. Once you see the teens driving Teslas you'll know you're in the right place.

I live in a tiny studio that I can cross in (literally) five steps and don't own an oven. But you know what? It's worth it. I love developing iPhone apps and if you want to work in San Francisco you accept that rent for a tiny place costs more than most people's mortgage.

If you and about 2 million other people start buying my books I promise to move out of Marin to a house in the redwoods up in Guerneville. No pressure. Wait that's a lie. Pressure.