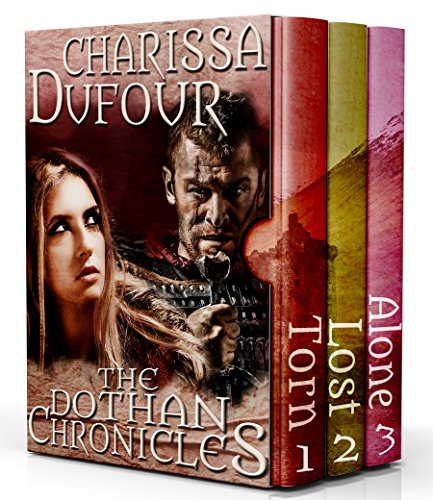 The Dothan Chronicles: The Complete Trilogy

*This is a completed series*
King Wolfric Eberhand battles the last nation to stand against his raging armies. With help from the deadly knight, Sir Erin Caldry, he hopes to conquer the land of Dothan once and for all. Using his wealth and power, he has formulated the perfect plan to finally take their rich land. What he doesn't realize, is the youngest Dothan princess is currently a slave within his very own castle walls.
While out visiting the remote estate of a relative, Princess Bethany Kavadh is kidnapped by slavers. Bedraggled and weary, she finds herself sold into slavery. To her horror, she soon discovers that her new owner is none other than her family's worst enemy, King Wolfric. To fight her rising despair and to keep what little sanity she possess, Princess Bethany begins to fight back, sabotaging the efficient running of the House and function of their Armies.
But what happens when they realize her true identity?
Will they ransom her for the wealth of her nation?
Will they keep her as a slave? Or will they inflict an even crueler punishment?
The only things for certain are: The war between two nations will escalate, and one young princess's life shall forever be TORN.

King Wolfric Eberhand is enraged. His secret weapon-the one that will win him this war once and for all-has escaped, nearly killing his eldest son in the process. Now he must find a new way to destroy the Dothans.
Princess Bethan Kavadh, youngest daughter of the royal family of Dothan, is finally free. After spending months as a slave in King Wolfric's home, and then later as his son's fiancé, Bethany has escaped. Now, with the help of her rescuer Sir Erin Caldry, all she has to do is cross the great peninsula to return to the safety of her family.
Sir Erin Caldry has spent his life groveling to King Wolfric in the hopes of saving his sister, but when he learns that she doesn't want to be saved, he finds himself without a purpose. Through a series of unfortunate events, Sir Caldry finds himself on the chopping block. Rather than be executed, Sir Caldry escapes, taking the captured princess with him.
Little did they realize, their journey to Dothan will be fraught with danger. Will Bethany find her way home? Will Sir Caldry find a new purpose? Or will they both become forever Lost?

King Wolfric is at a loss. His secret weapon has fled, and reunited with her family, and his eldest son is pining for his lost love. If he doesn't act soon, his entire nation will begin to work against him. He must plan the final, and ultimate attack on the Dothans.
Princess Bethany Kavadh, youngest daughter to Wolfric's enemy, is no longer within his grasp. After more than a year away from home-living as a slave and fighting her way back to freedom-Princess Bethany is finally home. The only thing is, she is no longer content with home life.
It's not that her home has changed, but that she has changed.
As Bethany settles into home life again, a sickness descends upon her family and her betrothal to a nearby lord is announced. She and her brother, the king, disagree on everything from care for the sick to the duties of a princess.
Princess Bethany Kavadh will have to act fast to save her nation from the illness and Wolfric alike. The only thing is, she cannot do it Alone.

** As of 1.1.6.19 this book has received a major re-edit. Please make sure you have the most recent version. Not sure how to do that? Follow these directions. https://www.howtogeek.com/tips/how-to-get-the-latest-version-of-your-kindle-books-including-ours/**