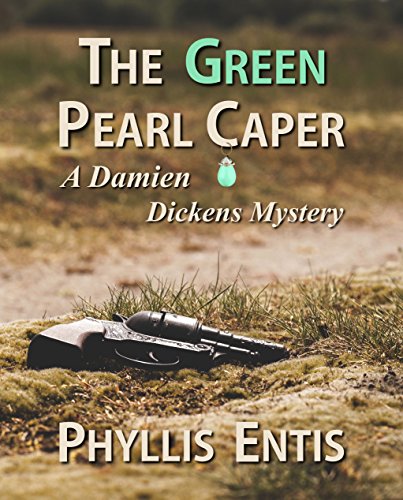 Celine Sutherland is dead - her body half-hidden under the Atlantic City Boardwalk - and Damien Dickens, P.I. is the prime suspect.

Detective Lt. James Holmes found Damien's gun and wallet near the crime scene, and discovered Celine's cash-filled, emerald-studded evening bag hidden in Damien's apartment. Sylvia Sutherland, Celine's older sister and CEO of the family's tobacco empire, insists that Dickens pulled the trigger. And the Sutherlands carry a lot of influence in Atlantic City. Even Damien's secretary has deserted him - gone to work for the Sutherlands. Only Celine's younger sister, Susan, believes in his innocence.

After Susan bails him out of jail, Damien strives to clear his own name as he tracks down Celine's killer.

The Green Pearl Caper, set in the summer of 1979, is the first in a series of Damien Dickens mysteries.

Phyllis Entis is the author of the Damien Dickens Mysteries series, which includes The Green Pearl Caper, The White Russian Caper and The Chocolate Labradoodle Caper. Her debut novel, The Green Pearl Caper, was a Library Journal SELF-e Selection. Phyllis is a free-lance writer and retired food safety microbiologist with degrees from McGill University and the University of Toronto. In 2007, ASM Press published her non-fiction book, Food Safety: Old Habits, New Perspectives. Phyllis lives in Carmel-by-the-Sea, California with her husband and their Australian Cobberdog, Shalom. When she’s not writing, Phyllis usually can be found walking around town, browsing in the local library, or enjoying her garden.