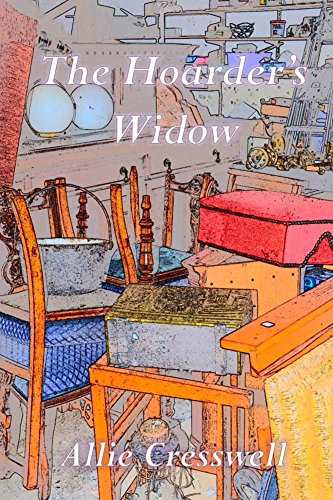 A novel by Amazon # 1 best-selling author Allie Cresswell. Suddenly-widowed Maisie sets out to clear her late husband's collection; wonky furniture and balding rugs, bolts of material for upholstery projects he never got round to, gloomy pictures and outmoded electronics, other people's trash brought home from car boot sales and rescued from the tip. The hoard is endless, stacked into every room in the house, teetering in piles along the landing and forming a scree up the stairs. It is all part of Clifford's waste-not way of thinking in which everything, no matter how broken or obscure, can be re-cycled or re-purposed into something useful or, if kept long enough, will one day be valuable. He had believed in his vision as ardently as any mystic in his holy revelation but now, without the clear projection of his vision to light it up for her as what it would be, it appears to Maisie more grimly than ever as what it is: junk.
As Maisie disassembles his stash she is forced to confront the issues which drove her husband to squirrel away other people's rubbish; after all, she knows virtually nothing about his life before they met. Finally, in the last bastion of his accumulation, she discovers the key to his hoarding and understands - much too late - the man she married.
Then, with empty rooms in a house which is too big for her, she must ask herself: what next?