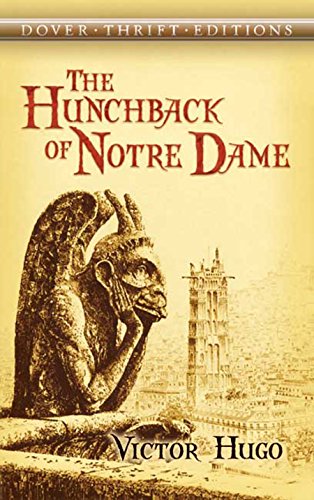 A mad priest, a vagabond playwright, a social-climbing soldier, and a deformed bell-ringer - all are captivated by a gypsy girl's beauty and charm. Two of them will betray her, but the others will remain loyal, even in the shadow of the gallows. These outlaws find sanctuary within the walls of medieval Paris' greatest monument, the grand Cathedral of Notre Dame.
"What a beautiful thingNotre-Dame is!" declared Gustave Flaubert of Victor Hugo's 1837 novel. Originally published asNotre-Dame de Paris (Our Lady of Paris), it was conceived as a story of the cathedral itself, which functioned as the passionate heart of fifteenth-century city life. But Hugo's human drama rivals the Gothic masterpiece for dominance. Drawn with humor and compassion, his characters endure, both in literary history and in readers' imaginations: Frollo, the sinister archdeacon; Quasimodo, the hideous hunchback; and the enchanting outcast, Esmeralda.

Victor Marie Hugo (/ˈhjuːɡoʊ/; French: [viktɔʁ maʁi yɡo]; 26 February 1802 – 22 May 1885) was a French poet, novelist, and dramatist of the Romantic movement. He is considered one of the greatest and best-known French writers. In France, Hugo's literary fame comes first from his poetry and then from his novels and his dramatic achievements. Among many volumes of poetry, Les Contemplations and La Légende des siècles stand particularly high in critical esteem. Outside France, his best-known works are the novels Les Misérables, 1862, and Notre-Dame de Paris, 1831 (known in English as The Hunchback of Notre-Dame). He also produced more than 4,000 drawings, which have since been admired for their beauty, and earned widespread respect as a campaigner for social causes such as the abolition of capital punishment.

Though a committed royalist when he was young, Hugo's views changed as the decades passed, and he became a passionate supporter of republicanism; his work touches upon most of the political and social issues and the artistic trends of his time. He is buried in the Panthéon. His legacy has been honoured in many ways, including his portrait being placed on French franc banknotes.