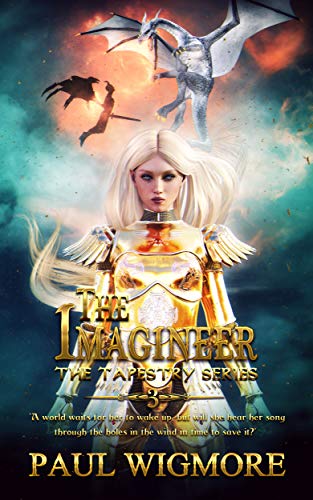 The Imagineer: Book Three of the Tapestry Trilogy

The power of the Imagineer is unfathomable and immeasurable. Which is why one only happens upon these very special beings once in an age of generations.
Princess Sophia, the last imagineer found herself betrayed by the very person who should have kept her safe from the darkness and protected her from the ill winds riding on her coattails.
Her father, King of Astaria sold her to her evil uncle when she refused to do his bidding, her only escape to create a world within a magical tapestry for her and every citizen of Astaria to escape to.
The demon, Saul now rules the between inside the world of the weave, but his ambition knows no bounds. When he learns who his ‘true’ creator is he wants more than the between. He wants out of the tapestry and into the world beyond.
If Saul were to escape into the world beyond the tapestry, then Astaria and its twin moons would perish like the world of the weave already has.
Saul has been searching for the imagineer for millennia, but she has been asleep, bitten by a dark rose sent by the demon. She must wake up and return to Astaria and take her rightful place at the throne.
But at what cost to her?

Paul Wigmore was born in Coventry in 1975. Now living in Manchester and running his own business. The first book to capture his attention at the young age of fourteen was 'Four Past Midnight' by Stephen King. Since then his imagination has been captured by other Great authors such as James Herbert and Clive Barker. He now wants to capture your imagination and take you on his journey with him. 'The Tapestry' is his first novel and 'The Weavemaker' is its sequel, recently published. The final part of the trilogy is to be published very soon.