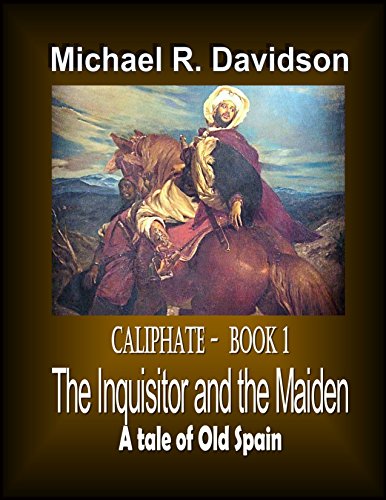 The Inquisitor and the Maiden: Caliphate

In 1492 victorious King Fernando of Aragon forces the daughter of the last Muslim ruler in Andalusia to become his concubine as a gesture of "reconciliation." The product of their coupling, a secret Muslim with an abiding hatred for his father, founds a line that nurtures the flame of vengeance through the centuries.

Disillusioned by Spain's failing fortunes in the 30-Years-War, Eduardo Macías leaves the Army of Flanders and sets out for home. Eduardo's reputation as a valorous soldier leads to his being named Captain of the Santa Hermandad, a Spanish force charged with protecting the people and maintaining the law. He is forced to accept a mission by officials of the Holy Inquisition to investigate an alleged case of heresy involving a nobleman with ancient royal ties. What Eduardo discovers places him in a dangerous situation at odds with the Inquisition, and he must choose between upholding his honor and excommunication.

Michael R. Davidson was raised in the Mid-West. Heeding President Kennedy’s call for more young Americans to learn Russian he studied the language, and military service took him to the White House where he served as translator for the Moscow-Washington “Hotline.” His language abilities attracted the attention of the Central Intelligence Agency, and following his military service Mr. Davidson spent the next 28 years as a Clandestine Services officer. Seventeen of those years were spent abroad in a variety of sensitive posts working against the Soviet Union and the Warsaw Pact. In the private sector he worked as a business owner and security and economic development consultant before devoting full time to his writing.