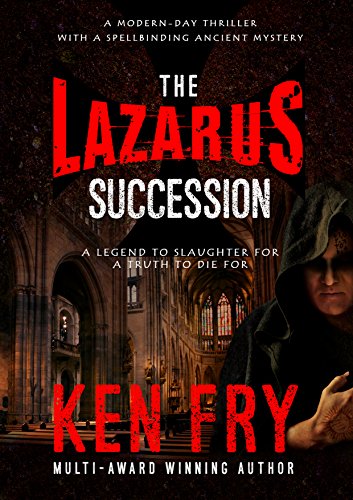 The Lazarus Succession: A Modern-Day Thriller with a Spellbinding Ancient Mystery (The Resurrection Chronicles)

A LEGEND TO SLAUGHTER FOR
A TRUTH TO DIE FOR...
An Amazon UK Bestselling Religious Mystery since July 2017.

The Lazarus Succession takes readers to the ancient scene of Christ's greatest miracle, to medieval Spain, and back to modern-day Europe. A modern-day thriller with a spellbinding ancient mystery.

"Although similar in many ways to the books by Dan Brown, I enjoyed it more. At no point does the author over dramatize the story, but with his excellent grasp of the written word he leads us to accept the surreal as perfectly normal and possible. The writing is excellent, the book is a treasure in itself and I would love to award this six stars."
--Lucinda E Clarke for READER'S FAVORITE

ON TO THE STORY...
According to legend, Annas Zevi, an artist who witnessed the raising of Lazarus, was told by Christ to paint what he saw. Since then, a sacred line of artists had been chosen in an unbroken succession. Each one painting a depiction of the miracle. Each work vanishing until the next successor is appointed. They were rumoured to be sacred icons with miraculous powers.

Throgmorton's client, a wealthy Spanish Condesa, is terminally ill and the icon is her last hope. She will pay and do whatever it takes to find the missing work of Cortez.

Unbeknown to the Condesa, Throgmorton seeks to make a vast personal fortune from the discovery of the paintings, and use it to reclaim his place in society.

Brodie and Ulla learns of Throgmorton's deceit and attempts to thwart his plans. As they delve deeper into the mystery of the missing Cortez painting, they discover a secret that changes their lives forever.

Just as it changed the lives of everyone it touched across the centuries.

✚ Praise for The Lazarus Succession ✚
"In many ways, Fry's book is superior to those featuring Robert Langdon.It is faster, sexier and more grown-up, for a start. The plot is intricate, the pace masterful..."
- Stuart Kenyon, author

"The Lazarus Succession delivers thereligious conspiracy and intricate mystery facets of Dan Brown with a careful weaving of Biblical events - with conspiratorial agents, both modern and ancient, in a clue-filled supernatural mystery thriller."
- Las Book Reviews

"The Lazarus Succession has a great historical and religious foundation combined with a dynamic plot, twists, and turns. Ken Fry knows how to keep the reader's attention and trigger their emotional response."
- Lilah E. Noir, author