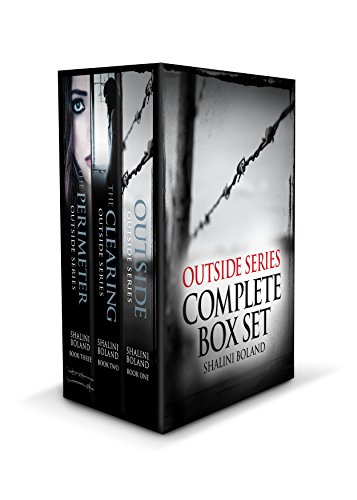 The Outside Series: The Complete Box Set

"a new and inventive twist to the post-apocalyptic genre that is fresh and entertaining"
Set in the near future, these three heart-stopping novels follow Riley as she overcomes the murder of her younger sister by tracking down the killer across a post-apocalyptic Britain.

At the same time, she is forced to take on the might of a twisted regime intent on conquering the nation.

Collectively the series has over 200 five-star reviews on Amazon and over 600 five-star ratings on Goodreads. Get all three novels for a discounted price by downloading this complete box set.

Book 1: OUTSIDE
Riley has always wondered what lies beyond the high-security perimeters of her community. But when tragedy forces her outside, she can't believe what awaits her.

Book 2: THE CLEARING
In the ravaged future, children are disappearing. Soon Riley will have to confront the terrible truth. An old enemy is approaching. Threatening to extinguish her way of life.

Book 3: THE PERIMETER
A girl in danger, a repentant killer, and a psychotic leader. The Perimeter is a darkly captivating tale of danger, love and redemption that will have you on the edge of your seat and up at night, turning the pages to find out what happens in the end.

Scroll up to grab your copy of this compelling dystopian adventure.

Shalini Boland lives in Dorset, England with her husband and two children. Before kids, she was signed to Universal Music Publishing as a singer/songwriter, but now she spends her days writing suspense thrillers and dark adventures (in between school runs and hanging out endless baskets of laundry).