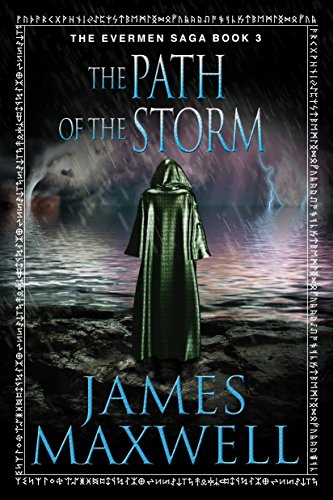 The Path of the Storm (The Evermen Saga Book 3)

Two years have passed since the war, yet without essence the Empire's economy has collapsed. Trade is at a standstill, famine sets in, and, with no food and no essence, the people begin to riot.

In the midst of the growing unrest, Miro struggles to balance his life with Amber against his resolve to keep threats to the Empire at bay. His sister, Ella, helps to build the machinery the Empire desperately needs, but she longs to find Killian and believes his powers will be needed in the conflict to come.

News of a wedding brings a much-needed ray of hope to the weary people. But as citizens and leaders gather from afar for the festivities, an evil threat shatters the fragile peace: one of the Evermen has returned. And he will not rest until he has completely destroyed the humans he despises.

This is the third book in the epic Evermen Saga.

James Maxwell is a London-based fantasy author. Born in New Zealand, and educated in Australia, from an early age he devoured the science fiction and fantasy classics, his love for reading translating to a passion for writing.

Inspired by a strong interest in history, he decided in his twenties to see the world. He relocated to London and then to Thailand, Mexico, Austria, and Malta, developing a lifelong obsession with travel. It was while living in Thailand that he seriously took up writing again, producing his first full-length novel, Enchantress, the first of four titles in his internationally bestselling Evermen Saga.

Golden Age is the first novel in his highly anticipated new series, The Shifting Tides.