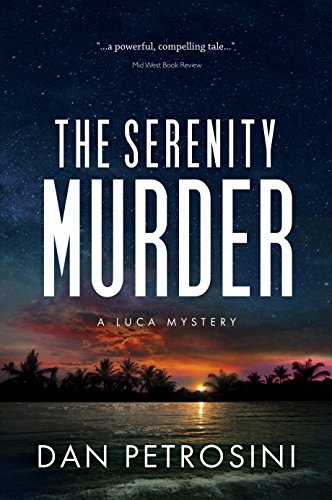 $2.99
Share on Facebook
Share on Tweeter
All that serenity was broken by human behavior gone off the rails.Philanthropist Marilyn Boggs, is murdered on her private island near Naples.

Though irresponsible and spoiled, Marilyn was a pillar of the community. Who'd want her dead?

˃˃˃ There's a huge difference between fear and being afraid and the suspects in this murder feared their existence was in jeopardy.

Det. Luca instincts point to the husband whose motives are clear but inconveniently, other, credible suspects surface.

˃˃˃ Full of betrayal, tension, and suspense, Det. Luca is back in another hard-boiled mystery.

The Serenity Murder is the third novel in the Luca Mystery series.

˃˃˃ You'll love this story for its characters, grit, and mystery.

Fans of Law and Order, CSI and House of Cards will love this gripping mystery crime thriller! The Serenity Murder can be read as a stand-alone novel.

Scroll up and grab a copy of The Serenity Murder today.