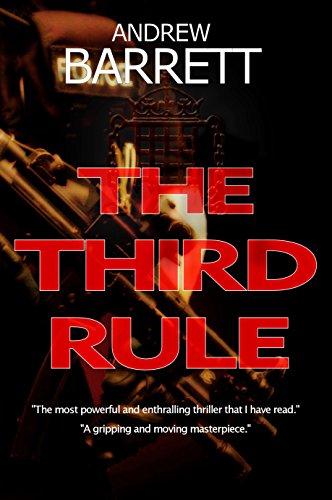 Capital Punishment is back!
When you're accused of murder, you'd better hide, run, or fight.

The Third Rule is England's new infallible capital punishment where absolute proof of guilt is not required. There's always a queue at the Slaughter House doors.

CSI Eddie Collins hasn't killed anyone, but he knows who has. That's why he's on the Slaughter House list, and when a government hunter tracks him down, Eddie has to fight or die.

If you like fast-paced crime thrillers with a forensic slant, raw emotions, and characters that reach out of the book and grab you by the throat, you'll love Andrew Barrett's Eddie Collins series.
To experience Eddie's battle to uncover the lies they told, buy The Third Rule today.

What people say about The Third Rule:
~ A gripping and moving masterpiece.
~ This was one of those books that I couldn't put down.
~ My kindle came with me everywhere so I could catch another chapter or even paragraph.
~ Superb.
~ Frighteningly realistic.
~ This is a chilling and all too realistic vision of the British Legal system as could worryingly happen in today's haphazard political climate.
~ Andrew Barrett has become one of my favourite authors and I have just purchased 'Black by Rose' to read very soon.
~ An excellent read. One of those books you can't put down. A great story and well written -look forward to more similar.
~ TV DRAMA, PLEASE. NOW!
~ It's been a long while since I finished a book, and then sat there for a few minutes reflecting on the story I've just read.
'If you like fast-paced and gripping crime thrillers with a strong forensic element, you'll love Andrew Barrett's The Third Rule. It will appeal to fans of authors like Kathy Reichs, Robert Bryndza and Angela Marsons.

Stand-alone thrillers
The End of Lies

I write crime thrillers, and have done since 1996, about the same time I became a CSI here in Yorkshire. All of my books are set in or around our biggest city of Leeds.

I don't write forumlaic crime fiction; each on is hand-crafted and home-grouwn to give you a unique flavour of what CSIs encounter in real life. Every book is rich with forensic insight but that insight never drowns the story; it's there to enhance your enjoyment only.

My thrillers live inside the police domain; they have detectives and uniformed officers, but they predominantly feature CSIs (od SOCOs as we used to be known). Come and live with us as we go about our sometimes unenviable tasks, and listen to the language we speak, see the things we see, and experience the emotions we feel.

So pull on your nitrile gloves and you face mask, get comfy and read on.

Find out more about me at www.andrew-barrett.co.uk where you can sign up for my newsletter and get free books too.