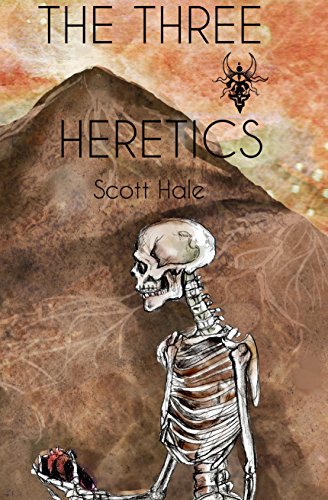 The Three Heretics (The Bones of the Earth Book 2)

Through hell,
we find heaven.

Vrana, now a grotesque shadow of her former self, has been enslaved by the Witch and forced into the Void. Meanwhile, the Corrupted involved in the genocide of Geharra and the birth of the Red Worm have begun to impose their worldviews on others. King

Edgar is abandoned in the Nameless Forest and forced into a murderous mission that not only reveals the origins of the vermillion veins, but the unholy events that have led to his rule of Eldrus.

Atticus, the undying gravedigger, seeks revenge against the king for the death of those he loves, while finding a way through the Black Hour itself to resurrect the dead.

Felix, the Holy Child, plagued by visions of Vrana in his sleep, tries to find a way to liberate her from her torment. Unsure who he can trust, he is pulled further into the darkness and treason all around him.

Taking place before, during, and after Vrana's journey, The Three Heretics explores those three Corrupted who have, through subterfuge and slaughter, righteousness and reluctance, manipulated the world to their liking, while inadvertently bringing it closer to another Trauma.