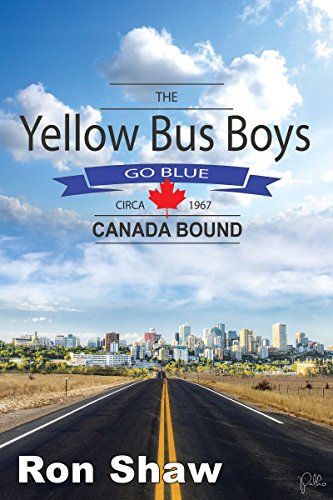 It was a fantastic time to be a teenage boy in America.
In 1967, seventeen, Atlanta, high school boys embarked on an adventure of a lifetime, climbing aboard the little blue bus on a free, ten-day, summer vacation courtesy of the Warren Memorial Boys' Club. This year's trip sends them to Montreal, Canada and Expo '67.
Ronnie "Baby Whale" Shaw of THE YELLOW BUS BOYS is on his fourth such trip with several of his yellow bus boys friends. New characters will emerge during this "summer of love" vacation.
This outreach program was sponsored by the Boy's Clubs of America, McDonald's Hamburgers, and the Lions' Club for local boys who had attained perfect school attendance.
Climb aboard the bus with the boys and their adult chaperones for laughs, tears, and plenty of teenage hijinks as they plunder their way from Atlanta, Georgia to Montreal, Canada and back, hitting all points of interest in between.
They're a ragtag bunch of rowdy boys who manage to light up every tourist spot along their path. The people, places, and things they encounter will probably, never be the same.
A murder plot is hatched.
Will they all make it home in one piece?
Can the boys handle the pressure on this gantlet of a trip?
Will Niagara Falls claim an Atlanta boy?
Have the bail money handy, and be ready to laugh your primordial tail off.
Experience the metamorphosis as two of the boys are forced to grow into men while enjoying the seedy streets of the French section of Montreal.
The Yellow Bus Boys Go Blue Canada Bound is an excursion of riotous fun!