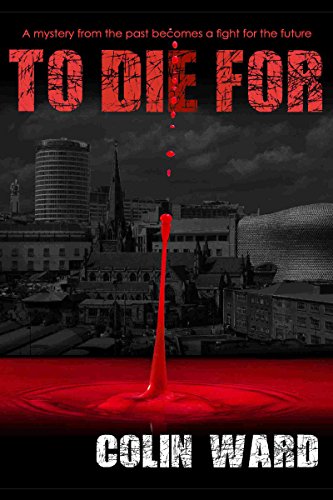 To Die For is an action-packed crime thriller set in Birmingham, where a killer's thirst for blood forces DI Mike Stone to investigate the darkness of humanity itself.


A KILLER TELLING A SINISTER STORY
DI Mike Stone investigates an unusual murder. It quickly becomes clear that the killer has only revealed the first brutal chapter.

A DETECTIVE FIGHTING A DARK DAEMON
The case takes on a disturbing speed as Stone finds his professional and personal worlds colliding, exposing a painful past, and threatening his future.

A CONNECTION WITH A TERRIFYING TRUTH
Who is this case really about? How far must Stone go to uncover the truth? And at what cost?

(A signed paperback to available to UK buyers direct from the Author at inasmanywords.com)

After releasing my debut novel in August of last year and achieved fantastic reviews so far, I now have the paperback version on Amazon to make it easier for everyone to get a copy.
I have also released my debut poetry collection, Ripples, in Kindle and paperback.

I've been writing for about twenty years or so now. For many years I wrote plays and musicals, especially as part of being a Drama teacher in my previous life. Now I have gone full power into the world of writing and have released my debut novel - "To Die For". The Crime Fiction genre was the natural place for me to go, with my interest in crime (fictional only...nothing to see hear, officer...) and especially because in 2013-2014 I discovered my favourite Authors.

Simon Kernick's "Deadline" was my first venture into the genre, and I was hooked. It then followed with Mark Billingham, Michael Robotham, Lisa Ballantyne, Adam Creed, and so on. There are unashamed influences of all of these in my debut, and I am happy with that.

Indie writing is my passion, and my new label "In As Many Words" is all about building up that kind of supportive community. One where we should not all have to wait for someone else to tell us our story is worth telling.