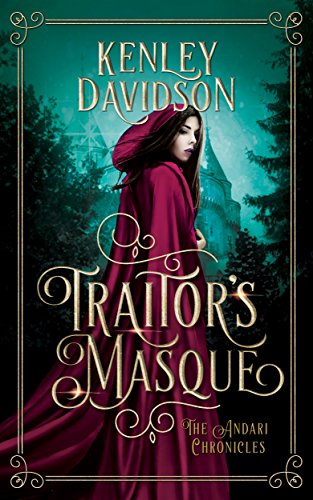 Traitor's Masque: A Reimagining of Cinderella (The Andari Chronicles Book 1)

How much is love truly worth?
What would you give up in order to keep it?

Trystan was once the pampered daughter of a wealthy aristocrat, but his unexpected death has left her with nothing. Desperate to escape her stepmother's malicious web of lies, Trystan will do almost anything to gain her freedom-even play a part in a devious plot to disinherit the kingdom's unpopular heir, Prince Ramsey.

But her freedom may cost more than she ever imagined. At the glittering royal masque, two very different princes will compete for the hearts of their people, and Trystan must decide where her loyalties lie-with the man who may be able to save her kingdom, or the man who has stolen her heart.

It's a lot of responsibility for a girl with no godmother in sight, but with so much at stake, Trystan can't afford to give up. Will she betray her kingdom to make her dreams come true? Or will she sacrifice her own happily ever after for the sake of the man she loves?

A spellbinding romantic fantasy inspired by Cinderella, Traitor's Masque is the first book of the Andari Chronicles, a series of interconnected but stand-alone fairy tale retellings.

Kenley Davidson is a story-lover, word-nerd and incurable introvert who is most likely to be found either writing or hiding somewhere with a book. A native Oregonian, Kenley now resides in Oklahoma, where she persists in remaining a devoted pluviophile. Addictions include coffee, roller coasters, more coffee, researching random facts, and reading the dictionary (which is way more fun than it sounds). A majority of her time is spent being mom to two kids and two dogs while inventing reasons not to do laundry (most of which seem to involve books).