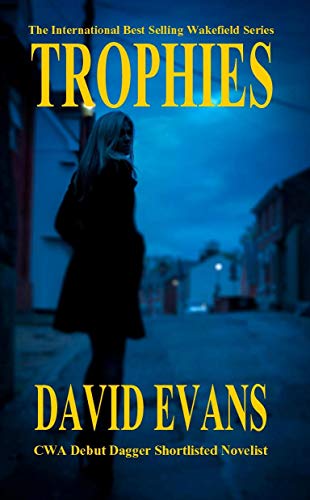 From the CWA Debut Dagger Shortlisted Novelist comes an extraordinary crime novel that everyone is raving about.

When DI Colin Strong interviews a suspect on suspicion of handling stolen goods he's convinced he's heard their voice before. Nearly 25 years ago the tape of Wearside Jack taunted West Yorkshire Police and his suspect fits the profile.
Then the body of a known burglar shows up and a mysterious metal case is discovered at the scene.
Strong turns to his close friend, journalist Bob Souter, and embarks on an awkward alliance to probe areas he is unable to explore.
As the murder suspects start to disappear Strong must discover just who the shadowy figure inciting fear and panic amongst those he encounters is.
Strong wants to bring a murderer to justice and Souter is hungry for a story.
Who will get to the truth first and can their friendship remain intact?

Trophies is the first book in The Wakefield Series.

David graduated from Manchester University and had a successful career as a professional in the construction industry. His writing has generated strong acclaim having had a stage play shortlisted in the Essex Playwrights Festival in 2001 and gaining Commended and Highly Commended awards at Writers’ Conferences in 2010, 2011, 2012 and 2013 for his crime writing. In 2013, his novel, TORMENT, was shortlisted for the CWA Debut Dagger. His work is also exampled in How to Write a Chiller Thriller by Sally Spedding and published in April 2014. He has frequently been profiled in the press including Yorkshire Post, East Anglian Daily Times and BBC Radio. He is a frequent guest of the Essex Book Festival and a regular attendee at the Writers’ Café events of the Ipswich Arts Festival. Delighted to have a 3 book publishing deal with Bloodhound Books for his Wakefield Series of crime fiction.