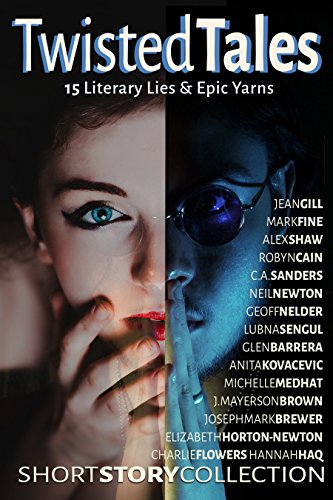 A unique short story anthology curated by the readers and editorial team of READERS CIRCLE OF AVENUE PARK (#RCAP). It's a global effort, literally, with contributions from 15 authors across exhausting time zones that extend from Africa, Europe, America and Asia. This is the cryptic one-liner each author gave to describe their twisted tales...

ROBYN CAIN: Consider carefully where you walk the dog.
GLEN BARRERA: A burglar has an unexpected encounter with a very large dog.
JOE BREWER: A young man's plan for his future takes an unexpected twist.
MICHELLE MEDHAT: Some pasts never let go!
ALEX SHAW: Essex villain Big Chris Cotton wants to leave his life of crime for one of sun, sex and sangria, but will his past let him go?
ANITA KOVACEVIC: A woman goes job-hunting and stumbles upon a mother who is trying to save her son's life from a bully in a completely unexpected way.
C.A. SANDERS: A group of New York City children play a street game with a mysterious stranger and their souls as the prize.
NEIL NEWTON: A cutting edge linguist launches the definitive study of dialect and finds out there is more to the structure of the universe than he suspects.
LUBNA SENGUL: Battle of two minds, Julian must decide his fate.
J. MAYERSON BROWN: Cheating once is forgivable. But twice?
JEAN GILL: Coming of age is tricky for an unwanted zodiac sign.
CHARLIE FLOWERS & HANNAH HAQ: An English nationalist and a Muslim girl share a long train ride and find that more brings them together than divides them.
GEOFF NELDER: A grape-sized micrometeorite hits John's house at the same time every day. Help!
ELIZABETH NOREEN-NEWTON: Gaunt Thibideaux was a man of habits. And you know what they say. "Old Habits" die hard.
MARK FINE: An exotic foreigner finds his beautiful bride is now bored with him. Is it the end of their domestic bliss or is there a twist?

To retain a distinctive international flavor (or 'flavour') each story is in the English style of its author, so some stories are in British English, some in American, and some reflect the jargon of a region.