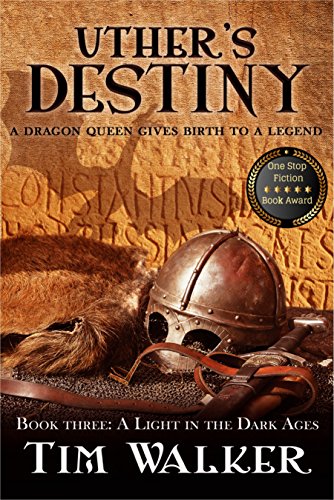 Uther's Destiny (A Light in the Dark Ages Book 3)

Late fifth century Britannia recoils in shock at the murder of charismatic High King, Ambrosius Aurelianus, and looks to his brother and successor, Uther, to continue his work in leading the resistance to barbarian invaders. Uther's destiny as a warrior king seems set until his world is turned on its head when his burning desire to possess the beautiful Ygerne leads to conflict. Could the fate of his kingdom hang in the balance as a consequence?

Court healer and schemer, Merlyn, sees an opportunity in Uther's lustful obsession to fulfil the prophetic visions that guide him. He is encouraged on his mission by druids who align their desire for a return to ancient ways with his urge to protect the one destined to save the Britons from invaders and lead them to a time of peace and prosperity. Merlyn must use his wisdom and guile to thwart the machinations of an enemy intent on foiling his plans.

Meanwhile, Saxon chiefs Octa and Ælla have their own plans for seizing the island of Britannia and forging a new colony of Germanic tribes. Can Uther rise above his family problems and raise an army to oppose them?

Book three in A Light in the Dark Ages series, Uther's Destiny is an historical fiction novel set in the Fifth Century - a time of myths and legends that builds to the greatest legend of all - King Arthur and his knights.

This book is preceded in the series by Abandoned (book one) and Ambrosius: Last of the Romans (book two).