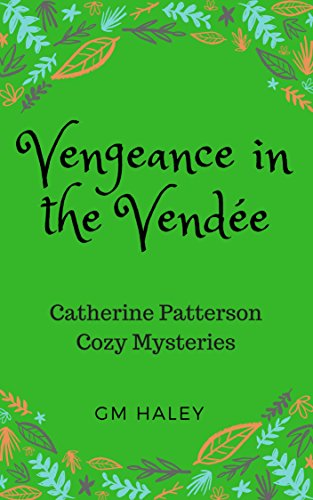 It is amazing how Catherine seems to attract dead bodies at her chambres d'hôtes in rural southwest France. Even local Inspector Maupetit seems to think it odd that mystery, murder and the urge to do some amateur sleuthing all focus around this woman and her picturesque little corner of the world. When her neighbour has her garden dug up for a small pond, the contractor stumbles over a skeleton. The forensic experts deduce that it is a very old skeleton, but there are tissue remnants of a more recent body being buried next to the skeleton. Only this body has mysteriously disappeared. And her friend, Marie, is being accused of murdering her husband, while Catherine's husband, Karl, discovers one of the chambres d'hôtes guests dead in the barn. The mystery thickens as the local mayor becomes involved, perhaps not as directly as suspected, all while his son is preparing for his wedding to another of Catherine's friends.

Vengeance in the Vendee is GM Haley's second book in the Catherine Patterson Mystery Books. The collage of characters, both friend and foe, interweaves into a fascinating tale with ever mounting tensions that lead to an unexpected climax. The wedding makes for a final backdrop of the picturesque setting of Vendee. The unique character of the location is well presented, both visually and in the dialogue that characterizes the French and the not-so-French residents of the local community, as well as the visitors to the chambres d'hôtes. A lively and interesting read, with a good mystery. Readers will be looking forward to the next Catherine Patterson mystery, especially since dead bodies seem to always appear where she least expects to find them.