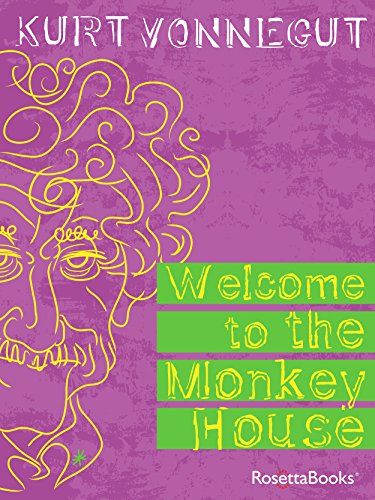 Welcome to the Monkey House

This short-story collection Welcome to the Monkey House (1968) incorporates almost completely Vonnegut's 1961 "Canary in a Cathouse," which appeared within a few months of Slaughterhouse-Five and capitalized upon that breakthrough novel and the enormous attention it suddenly brought.

Drawn from both specialized science fiction magazines and the big-circulation general magazines (Saturday Evening Post, Colliers, etc.) which Vonnegut had been one of the few science writers to sell, the collection includes some of his most accomplished work. The title story may be his most famous--a diabolical government asserts control through compulsory technology removing orgasm from sex--but Vonnegut's bitterness and wit, not in his earlier work as poisonous or unshielded as it later became, is well demonstrated.

Two early stories from Galaxy science fiction magazine and one from Fantasy & Science Fiction (the famous "Harrison Bergeron") show Vonnegut's careful command of a genre about which he was always ambivalent, stories like "More Stately Mansions" or "The Foster Portfolio" the confines and formula of a popular fiction of which he was always suspicious. Vonnegut's affection for humanity and bewilderment as its corruption are manifest in these early works.

Several of these stories (those which appeared in Collier's) were commissioned by Vonnegut's Cornell classmate and great supporter Knox Burger, also born in 1922.

Kurt Vonnegut (1922-2007) is one of the most beloved American writers of the twentieth century. Vonnegut's audience increased steadily since his first five pieces in the 1950s and grew from there. His 1968 novel Slaughterhouse-Five has become a canonic war novel with Joseph Heller's Catch-22 to form the truest and darkest of what came from World War II.

Vonnegut began his career as a science fiction writer, and his early novels--Player Piano and The Sirens of Titan--were categorized as such even as they appealed to an audience far beyond the reach of the category. In the 1960s, Vonnegut became closely associated with the Baby Boomer generation, a writer on that side, so to speak.

Now that Vonnegut's work has been studied as a large body of work, it has been more deeply understood and unified. There is a consistency to his satirical insight, humor and anger which makes his work so synergistic. It seems clear that the more of Vonnegut's work you read, the more it resonates and the more you wish to read. Scholars believe that Vonnegut's reputation (like Mark Twain's) will grow steadily through the decades as his work continues to increase in relevance and new connections are formed, new insights made.

Author Kurt Vonnegut is considered by most to be one of the most important writers of the twentieth century. His books Slaughterhouse-Five (named after Vonnegut's World War II POW experience) and Cat's Cradle are considered among his top works. RosettaBooks offers here a complete range of Vonnegut's work, including his first novel (Player Piano, 1952) for readers familiar with Vonnegut's work as well as newcomers.

Kurt Vonnegut was born in Indianapolis in 1922. He studied at the universities of Chicago and Tennessee and later began to write short stories for magazines. His first novel, Player Piano, was published in 1951 and since then he has written many novels, among them: The Sirens of Titan (1959), Mother Night (1961), Cat's Cradle (1963), God Bless You Mr Rosewater (1964), Welcome to the Monkey House; a collection of short stories (1968), Breakfast of Champions (1973), Slapstick, or Lonesome No More (1976), Jailbird (1979), Deadeye Dick (1982), Galapagos (1985), Bluebeard (1988) and Hocus Pocus (1990). During the Second World War he was held prisoner in Germany and was present at the bombing of Dresden, an experience which provided the setting for his most famous work to date, Slaughterhouse Five (1969). He has also published a volume of autobiography entitled Palm Sunday (1981) and a collection of essays and speeches, Fates Worse Than Death (1991).